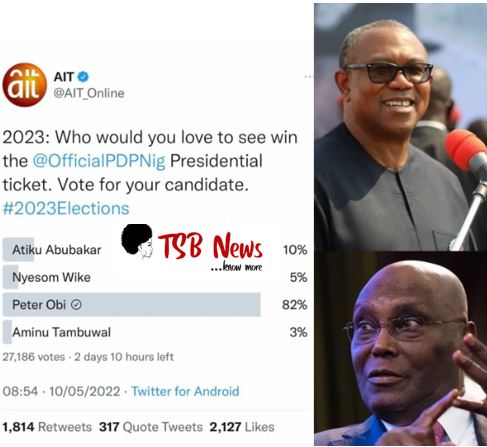 AIT has deleted its Twitter online poll of PDP presidential aspirants as Peter Obi led the poll by 82%.

The official Twitter handle of Africa Independent Television, @AIT_Online, created the online poll wherein it asked people to vote for whom they would love to win the PDP presidential ticket. The poll had four candidates: Atiku Abubakar, Nyesom Wike, Peter Obi, and Aminu Tambuwal.

The poll had already received more than 27,000 votes by 10/05/2022, not up to 2 days after it was created, when it was suddenly deleted. But many Twitter users had already taken and posted screenshots of the poll before the deletion.

The screenshots showed Peter Obi leading by a whooping margin of 82%; Atiku Abubakar came in a very distant second at 10%, while Nyesom Wike and Aminu Tambuwal brought in the rear at 5% and 3% respectively.

@AIT_Online offered no explanation for deleting the poll. But the Owner of AIT Raymond Dokpesi is the Head of Atiku Campaign Organisation