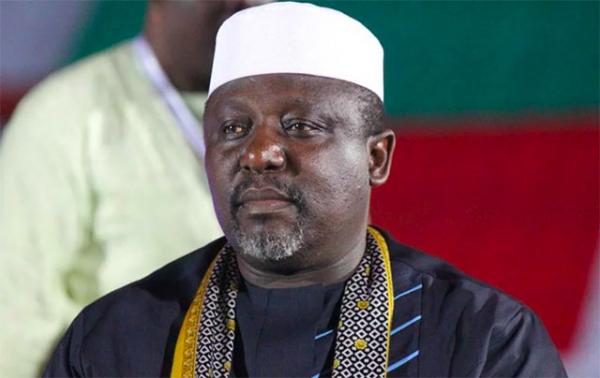 Justice Inyang Ekwo of the Federal High Court in Abuja has granted bail to the former governor of Imo State, Rochas Okorocha.

Delivering a ruling in his bail application this morning, the judge granted bail to the embattled former governor in the sum of N500 million and a surety in like sum.

The former governor was arraigned before the court by the EFCC on Monday, May 30 on a 17-count charge. He was accused of conspiring with others, including a member of the All Progressives Congress (APC) and five companies to steal from public coffers when he served as governor.

He denied the allegations when the charges were read to him.

While ruling on his bail application today May 31, Justice Ekwo ordered that the surety to be produced by Okorocha must be a responsible citizen who has landed property in the like sum of the bail granted to the presidential aspirant. The judge also directed Okorocha to deposit his international passport with the registry of the court and should not travel outside the jurisdiction of the court without the court’s permission.

The judge also ordered the court registry to inform the Nigeria Immigration Service that Okorocha’s passport was in its custody.

Justice Ekwo, however, ordered that the former governor should remain in the custody of the Economic and Financial Crimes Commission (EFCC) until his bail conditions are met.

We Were Not Elected To Only Pay Salaries – Governors