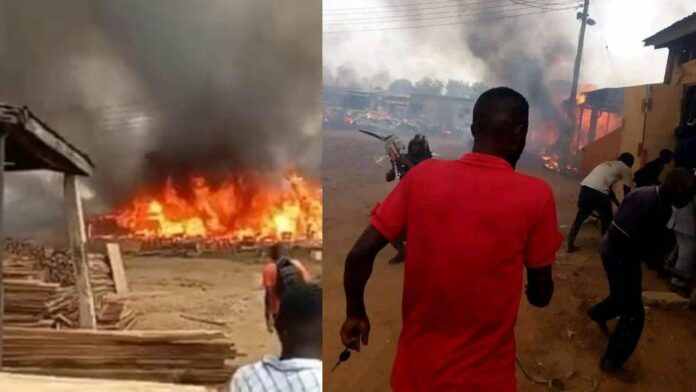 The Minister of the Federal Capital Territory (FCT), Mohammed Bello, has confirmed that at least four people were killed in violence at the Dei-Dei market on Wednesday.

Mr Bello, on Wednesday, also ordered the indefinite closure of the Dei-Dei International Market following a clash between commercial motorcyclists and the traders.

Mr Bello gave the order after inspecting the scene of the incident alongside the FCT Commissioner of Police, Sunday Babaji, Director of State Security Services, other sister security agencies and top officials of the FCT Administration.

PREMIUM TIMES reported how the violence spread at the market Wednesday following an accident in which a woman was killed.

Trouble started in the market when a female trader yet to be identified fell off a commercial motorcycle and was crushed to death by an articulated vehicle.

The minister directed the community and the market leaders to fish out the hoodlums responsible for the crisis.

“The community and market leaders must fish out hoodlums and bad eggs among them. Unfortunately, this time around, hoodlums carried arms and they shot innocent people.

“As a matter of fact, I saw four corpses this is very sad and totally unequivocally unacceptable in Abuja.

“We have agreed with security agencies that full-scale investigations will be done, and the communities have to be part and parcel of the solution or else there will be no peace.

“In the interim, the timber market and the surrounding markets, including all the activities on-road that have clustered the road and made it unpassable will all stop until the technical team reviews everything, and then we will take the next decision.”

Mr Bello said that there was no tribal or religious misunderstanding because all the leaders of various communities have lived in peace for many years.

“This is simply the matter of criminals and hoodlums taking the laws into their hands,” he said.

The Vice-Chairman, Timber Shed Market Dei-Dei, Ifeanyi Chibata, told the minister and his team that 45 to 50 shops were burnt with 25 vehicles set ablaze worth a total of over one billion naira.

Also, the Secretary Tomato and Onion Sellers Association Dei-Dei, Dahiru Mani, disclosed that four persons were killed during the clash in the market.

He appealed to the minister to ensure the provision of a police division with adequate personnel in the market.

This is contained in a statement signed by the FCT Police Public Relations Officer (PPRO), Josephine Adeh.

One of the affected traders, Mr Kalu Nze who witnessed the accident, told journalists that the crisis started after a motorcycle carrying a woman ran into a trailer and the trailer crushed the woman to death, that after killing the woman, the driver of the trailer refused to stop and he drove off but was later caught at Deidei junction.

“That was the beginning of the crisis, the motorcycle riders who were visibly angry went back and mobilized themselves from every direction they could penetrate and decided to set the timber shades on fire.

“As I am speaking with you, all my goods are seriously affected, because my goods are positioned behind the markets. Their attacks were unexpected, as nobody thoughts that burning the motorcycle that led to the death of that innocent woman would lead to this crisis. All these motorcycle riders are always out of control, the government should do something about them.

“Also, a particular plaza close to the Timber market was also been vandalized. What I have lost in the fire, I cannot evaluate it, because most of my goods inside the market were affected,” he said.

Another trader Mr Johnson Uzor in a plaza said that a handful of soldiers who arrived at the scene on time were the ones that brought the crisis to control.

“But for now, everyone is where he or she can be safe. No fight presently, but the soldiers are on alert securing their building material shops, but the timber market was invaded from behind because timbers are highly inflammable and they were not happy that fire service could not come early, which led to the damage of the market.

“The goods that have gone down cannot be estimated at the moment. I can not even access the area of the crisis, because the military has prevented any kind of movement. It is after the whole crisis, I will be able to know the damage done to my goods, but it is worth millions,” he said.