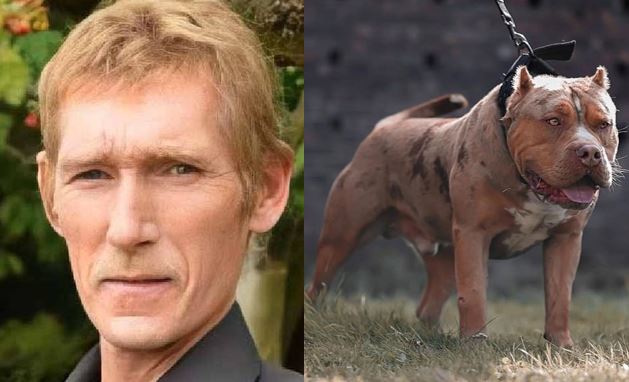 He was in the kitchen when his son’s partner Chanel Fong, 28, heard him telling the powerful dog: ‘Get off me.’

Chanel rushed into the room in Wrexham, North Wales, to tell Cookie to get down – but then spotted blood pouring from Keven’s leg.

Emergency services rushed to the scene while desperate Chanel, who is the partner of Keven’s son Josh, carried out CPR.

Chanel was left with her hands covered in blood as Keven went into cardiac arrest and was later pronounced dead by paramedics.

The family say the dog is ‘not aggressive in the slightest’ but likes to play as if it was a small puppy.

Paying tribute, Chanel wrote online: ‘I heard Kev say get off me Cookie so I went into the kitchen, told Cookie to get down which he did.

‘Anyone who has come into contact with Cookie knows how much of a big fat head play boy he is.

‘He’s not aggressive in the slightest.

‘Just thinks he’s still a small pup and bounces around rather than walk.

‘Kev said ‘He’s got me there’ and as I looked down there was blood pumping from Kev’s leg.

‘I grabbed Cookie’s blanket from his crate to try and keep the wound from bleeding.

‘I carried him to the sofa and called the ambulance.

‘Kev was with me but unresponsive, he grabbed my shoulder and told me he was going.

‘I told him he wasn’t and the call handler told me to lie him on the floor and do compressions.

Meet Cute Nigerian Twin Brothers Who Are Both Nurses & Bodybuilders...