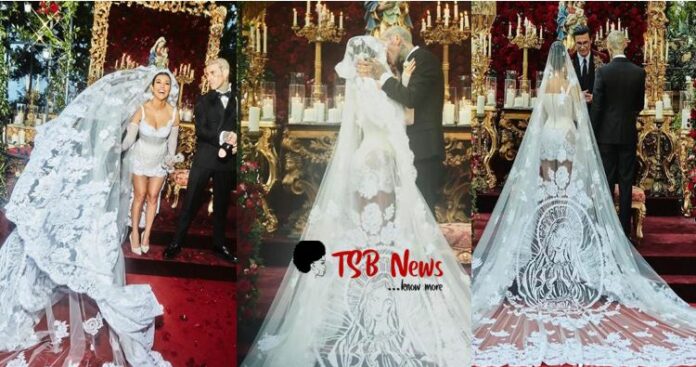 The couple – who exchanged vows in a practice ceremony in March before making their union official in a Santa Barbara courthouse last weekend – tied the knot in front of family and friends in Portofino, Italy, on Monday (NZ time).

Both bride and groom wore Dolce and Gabbana outfits, with the Poosh founder teaming her short white dress with a long embroidered veil.

Kardashian’s children, Mason 12, Penelope, nine, and seven-year-old Reign – who she has with former partner Scott Disick – were in attendance for the ceremony, along with her mother, Kris Jenner, and siblings Kim Kardashian, Khloe Kardashian, Kylie Jenner, and Kendall Jenner, as well as the latter’s boyfriend, Devin Booker, and her mum’s partner, Corey Gamble.

On Barkers’ side were his son Landon, 18, daughter Alabama, 16, stepdaughter Atiana De La Hoya, 23, and friends including Machine Gun Kelly and his Blink-182 bandmate Mark Hoppus.

According to MailOnline, 43-year-old Kardashian entered the garden for the outdoor ceremony at Castello Brown on the arm of her mother while a woman sang Ave Maria.

They then exchanged vows as dusk fell, before posing for photos ahead of further celebrations.