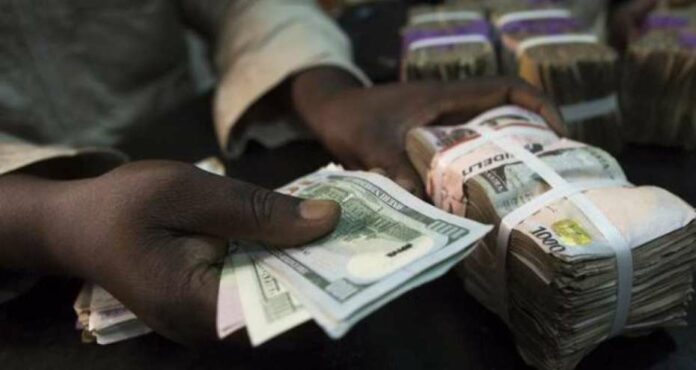 TSB NEWS reports that the naira, on Thursday, depreciated further against the dollar at the parallel section of the foreign exchange market.

Bureaux De Change operators (BDCs), popularly known as ‘abokis’, who spoke to newsmen in Lagos, quoted the naira at N595 to the dollar at the street market.

The figure represents a depreciation of N6 or 1 per cent compared to the N589 it traded last week.

The street traders put the buying price of the dollar on Thursday at N590 and the selling price at N595, leaving N5 profit margin.

They attributed the decline in the value of the naira to increased demand for the greenback (dollar) mostly by importers.

A parallel market (street/black market) is characterised by noncompliant behaviour with an institutional set of rules.

The Central Bank of Nigeria (CBN) has often maintained that the parallel market is not the true reflection of the naira.

On the official market side, the local currency depreciated at the investors and exporters window (I&E window) on Wednesday, exchanging at N418.75 to the dollar — a 0.12 per cent depreciation from N418.25 traded on Tuesday.

The open indicative rate closed at N417.70 to the dollar on Wednesday.

An exchange rate of N444.00 to the dollar was the highest rate recorded within the day’s trading before it settled at N418.75.