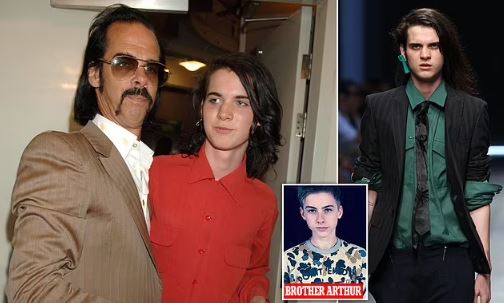 Nick Cave’s son Jethro Lazenby has died aged 30, the musician said today – seven years after the star’s 15-year-old son Arthur fell to his death from a cliff in Brighton.

Jethro, who lived in Melbourne, had been released from prison on bail two days before he died, having been jailed for kneeing his mother in the face during a row over cigarettes – leaving her ‘bruised and bleeding’.

‘With much sadness, I can confirm that my son, Jethro, has passed away,’ Cave said in a statement this afternoon. ‘We would be grateful for family privacy at this time.’ The Australian singer, best known as the frontman of Nick Cave and the Bad Seeds, was first struck by tragedy in July 2015 when Arthur fell 60ft to his death from a cliff in Ovingdean, near Brighton.

The 15-year-old, described by his family as a ‘beautiful, happy, loving boy’, had been taking the hallucinogenic drug LSD, an inquest later heard. Jethro was born to his Melbourne-based model mother Beau Lazenby in 1991, who was in a relationship with Cave at the time.

He himself largely worked as a model, while also taking on a number of acting roles. He was released on bail from Melbourne Remand Centre on Thursday after a magistrate ordered he undergo substance abuse treatment and avoid contact with her for two years

Fulani Herdsmen Are The New Power Brokers In Nigeria – Ali...