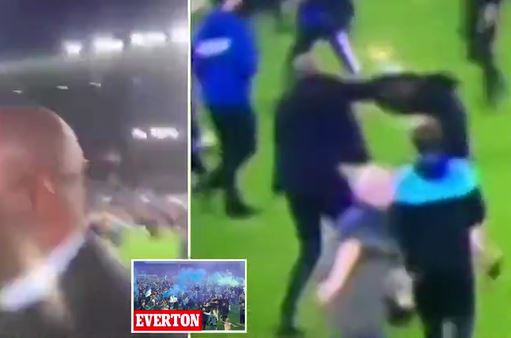 Patrick Vieira faces an FA investigation after kicking out at a fan on the night Everton celebrated securing their Premier League status.

More fan violence broke out in a series of pitch invasions last night where Patrick Vieira was seen kicking an Everton fan who repeatedly taunted him and Swindon Town players were attacked by Port Vale supporters celebrating their playoff semi-final victory on penalties.

The Everton supporter involved in the skirmish had filmed himself abusing Mr Vieira and giving him the middle finger before the Crystal Palace manager eventually kicked out, sending the moron tumbling to the ground. 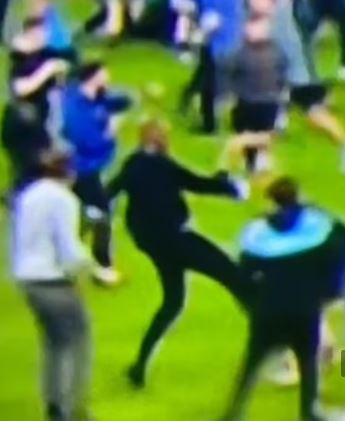 Thousands of people had ran on to the pitch a Goodison Park last night after Everton’s extraordinary 3-2 win over Crystal Palace helped Frank Lampard’s team avoid relegation. But Palace’s players and manager were left totally exposed and were not properly protected by stewards or police.

It was another shameful night for football in a week where Nottingham Forest fan Robert Biggs was jailed for 24 weeks for headbutting Sheffield Utd striker Billy Sharp on Tuesday night.

And Sharp’s fellow Blades striker Oli McBurnie has now been told to speak to police after he was accused of stamping on a Forest fan during the same pitch invasion.

Vieira, Woah!!! Good on him. Fans running on the pitch abusing players/managers has to stop! #vieira #football pic.twitter.com/4aEZTl7Si9