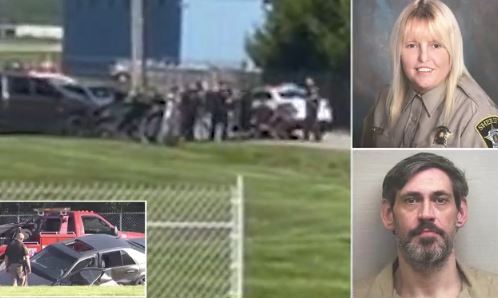 New footage shows the dramatic moment that US Marshals caught up to murder suspect Casey White and Alabama corrections officer Vicky White, who later died from her injuries after shooting herself in the head.

The pair were captured Monday afternoon after an 11-day manhunt that spanned multiple states.

They were found at a motel and led authorities on a brief car chase in Evansville that lasted ‘less than a few minutes,’ according to Vanderburgh County Sheriff Dave Wedding.

The multi-vehicle pursuit came to an end when they careened off the road after law enforcement deployed a ‘spike belt.’ US Marshals also crashed into them to get them to stop.

Vicky White, who was driving, was found pinned inside with a gunshot wound to the head, US Marshal Matt Keely told CNN.

The Vandenburgh County Coroner said she died at 7:06 p.m. on Monday, according to WHNT reporter Emily Moessner.

The assistant director of corrections faced up to 10 years in jail for helping Casey, a confessed killer who was already serving 75 years in prison, run away.

She helped break him out of a county jail in Alabama on April 29 with the excuse that she was taking him in for a mental health evaluation that was actually never scheduled.

Video recorded by eyewitnesses and posted on Facebook shows the moment authorities caught up to the runaway lovers on Monday. Casey is led away in handcuffs while at least a dozen law enforcement officers crowd around him.

The two were set to be brought back to Lauderdale County, Alabama to face various charges in connection with the escape. Casey will also face outstanding capital murder charges related to a 2015 killing.

Lauderdale County Sheriff Rick Singleton said he was feeling ‘pretty down’ after his former employee was pronounced dead.