Queen Letizia of Spain chaired the 30th Royal Board on Disability Council meeting in Mérida on Wednesday.

The Spanish monarch flashed her incredibly toned pins in an elegant monochrome dress as she received a warm welcome by Extremadura’s regional President Guillermo Fernandez.

The 49-year-old cinched her stylish ensemble at the waist with a large black belt and added height to her frame with black stilettos.

The royal accessorised with a black leather handbag and chic pearl earrings.

She wore her long brunette locks loose and donned a neutral palette of makeup enhancing her flawless complexion.

She greeted attendees and met with members of the board as she arrived for the meeting.

Luckily the women both saw the funny side and giggled as they embraced each other.

Last week,  Letizia hosted a lunch for Bulgaria’s President Rumen Radev and his wife in the country’s first state visit since 1999, alongside King Felipe.

The pair received the President and wife Desislava Radeva at LaZarzuela Palace in Madrid today as they embark on a three-day state visit to the country.

President Radev and his wife arrived under the invitation of King Felipe and the trip marks the first visit of a Bulgarian president to the Spain in over two decades. 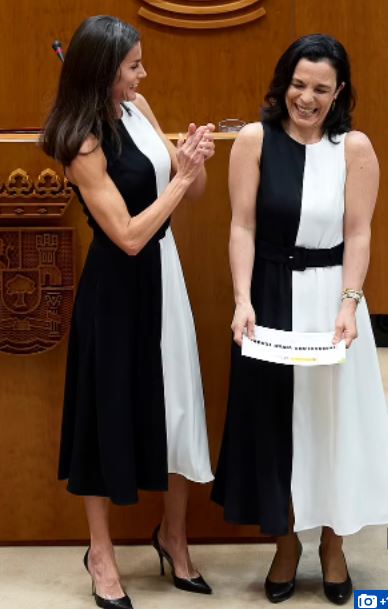