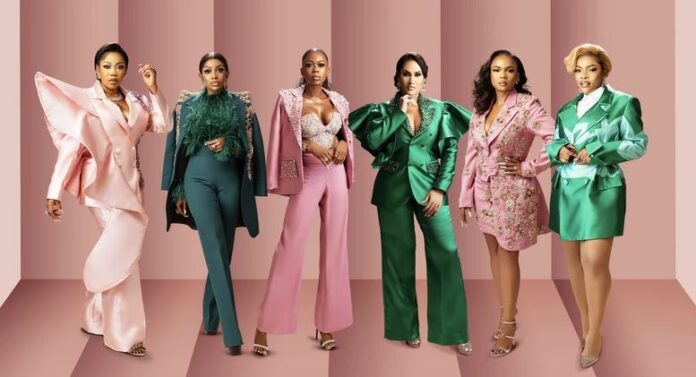 #RHOLagos – 5 times the housewives came to near blows

The past eight weeks has left fans of reality television clearing up Fridays for Showmax’s The Real Housewives of Lagos.

Produced by Dare Art Alade’s Livespot 360, the reality show has garnered commendable success, an instant hit for the drama its cast have put forward since it began streaming in April.

The housewives – Iyabo Ojo, Laura Ikeji, Mariam Timmer, Toyin Lawani-Adebayo, Chioma Goodhair and Caroline Hutchings have brought their fair share of drama with some stand out near fisticuffs.

In case you have missed some of the melodramatic moments on the show, here is a must-read list:

Not exactly a face-off but the ongoing Laura versus Caroline and Chioma began on their first meeting- an unveiling event hosted by Toyin Lawani. Laura appeared to have had a hard time bonding with the other housewives, a move which would later become the catalyst for future gbas gbos.

Episode three featured the long-awaited action following the tension of the preceding episode. Iyabo Ojo had gone on to spill details of her chitchat with Laura including the spicy bit where the social media Influencer talked about dishing Caroline a deserving slap.

All hell broke loose at the Boho themed Getaway with Caroline accusing popular blogger Linda Ikeji of ruining her marriage to her billionaire Ex.

Some of the heat spread to Caroline’s onscreen bestie, Chioma. Laura had, in previous episodes, expressed her dislike for Chioma. She shared that the popular businesswoman pretended not to know her for appearances. During the Boho party, the ladies had a heated exchange that saw choice words flying all over the place.

Episode four wrapped with the housewives getting on a private jet to Abuja for a weekend of fun hosted by Chioma.

Despite being host, Chioma and bestie, Caroline arrived the airport hours later than scheduled and expectedly, ticked off the other housewives. The erring ladies got into a mild exchange with Toyin who expressed her displeasure at being kept waiting.

5. Episode 8 – Laura vs Caroline (the Pimp versus the pimped)

This is the episode where the housewives finally get to blows. Laura and Caroline finally attempt to give us the catfight we’ve longed for since they publicized their beef. The housewives got into a very heated exchange where scandalous and embarrassing allegations were made. In addition, wigs and wardrobe mishaps reigned for long minutes…Exciting TV minutes.

New episodes of the Real Housewives of Lagos premieres Fridays on Showmax.