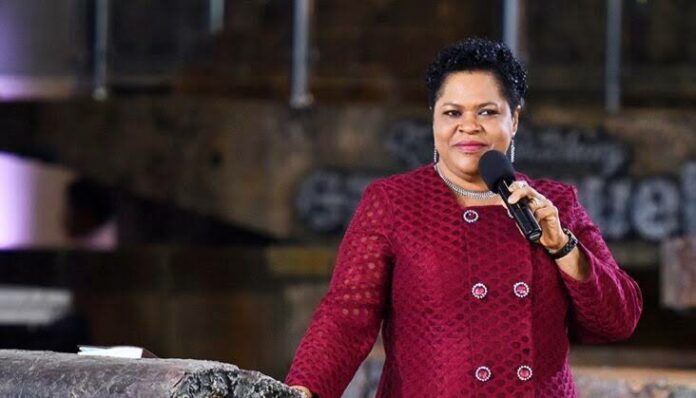 The tomb shelter of the late founder of the Synagogue Church of All Nations (SCOAN), Prophet Temitope Balogun Joshua, reported to have been gutted by fire last Wednesday was not affected by the inferno.

The Shelter tomb located at the SCOAN headquarters cathedral, Ikotun is about 30 streets, 5 kilometers away from its old site Agodo, Egbe, which was gutted by fire.

When newsmen visited the area during SCOAN Sunday live service, the tomb shelter was intact with a secured door at the entrance.

SCOAN members expressed joy as both gallery and ground floor were filled to the brim during the service, which commenced at about 8:00.a.m. at the church premises.

Wife of the late Prophet, Pastor Evelyn Joshua, Ugandans, Batswana, other African and International disciples of the church ministered at the service.

During the message titled: ‘Christ Proper Position In Our Lives’, Pastor Evelyn said: “ It is a privilege to be called the child of God and it is a privilege to belong to the household of faith. Almighty God we give you all the glory. We thank God for giving us the patience to deal with every situation. We thank God for changing us into his image, day by day and hour by hour.”

On the cause of the fire, a source said it was a sabotage and that the intention was to desecrate the shelter tomb at the headquarters.

“The fire outbreak at the mountain is to destroy the shelter tomb of the late Prophet and this is sabotage by some individuals. We are still investigating the matter,” the source added.