A United States jury on Wednesday found both Johnny Depp and his ex-wife Amber Heard liable for defamation following an intense trial riding on bitterly contested allegations of domestic abuse.

The seven-member jury in Virginia awarded Depp $15 million in damages after finding that a 2018 article penned by Heard on the “sexual violence” she had suffered was defamatory to Depp.

The jury also found that Heard was defamed by statements made by Depp’s lawyer, Adam Waldman, who told the Daily Mail that her abuse claims were a “hoax,” and awarded her $2 million in damages.

Heard said she was disappointed “beyond words” on Wednesday after the jury found she had made defamatory claims of abuse against her ex-husband, calling it a “setback” for women.

The disappointment I feel today is beyond words. I’m heartbroken that the mountain of evidence still was not enough to stand up to the disproportionate power, influence, and sway of my ex-husband,” Heard said in a statement released shortly after the verdict was read in Virginia.

“I’m even more disappointed with what this verdict means for other women. It is a setback. It sets back the idea that violence against women is to be taken seriously,” she said. 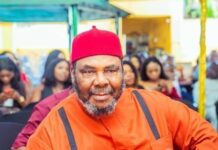