Folarin Falana, better known as Falz, is a Nigerian rapper, singer, actor, and activist is about to release his fifth studio album, titled ‘Bahd.’

Recall that the singer shared a snippet of his song with Nigerian music duo The Cavemen on his social media in March.

After weeks of speculation, he has finally revealed the tracklist and release date for the ‘Bahd‘ album.

The album will be released on June 6th, according to his recent tweet, and will feature Chike, Boy Spyce, BNXN fka Buju, The Cavemen, Tiwa Savage, and L.A.X.

See the tracklist below; 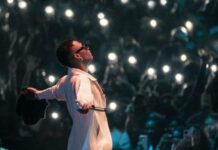