The Montgomery County Sheriff’s Office is searching for a Nigerian man, Obinna Igbokwe, who they believe shot and injured his wife before shooting her grandmother to death at a home in Spring, Texas.

The shooting happened in the 30120 block of Aldine Westfield Road around 7:30 p.m on Wednesday, June 1

According to deputies, 41-year-old Igbokwe and his wife were having an argument over custody of the couple’s 3-month-old son Mansa which led up to the shooting.

Officials say his wife, Tangela Igbokwe, was shot in the head and last said to have been in critical condition.

Her grandmother, Linda Larkins, was also shot in the head and pronounced dead at the scene.

Igbokwe reportedly took their son and fled in a 2008 white Honda Accord with license plate #KMY 0702. He was described as being 6 foot tall and weighing 190 pounds with black hair and brown eyes.

“Upon arrival, Deputies discovered two victims who both appear to have been shot in the head.  One victim (Tangela Igbokwe) was taken to a local emergency room where she is listed in critical condition, the second victim (Linda Larkins) succumbed to her injuries at the scene.

“Montgomery County Sheriff’s Homicide/Violent Crimes Detectives are investigating this shooting, and the investigation is very preliminary at this point

“The suspect is believed to be 41 year old Obinna Dwayne Igbokwe, a black male, who fled the area in a 2008 white Honda Accord bearing Texas license plate KMY0702 and was last known to be in the area of Interstate 45 and Highway 105.

“The investigation at this point has determined that Igbokwe shot his wife and her mother after a dispute about child custody, and fled the scene with his three month old son, Mansa Igbokwe.  An Amber Alert will be issued for the child.  Law Enforcement believes that the child is in imminent danger of serious bodily injury or death.

“Obinna Igbokwe is 6 foot tall, 190 pounds with black hair and brown eyes, and is believed to be armed and dangerous.  Do not approach him, please call police if you see him or the white car

“This is an ongoing investigation and no further details are available at this time.  If you have any information regarding the location of the suspect in this shooting, or the child, please contact the Montgomery County Sheriff’s Office at 936-760-5800 or Crime Stoppers at 1-800-392-STOP [7867] and refer to case number 22A161172.” 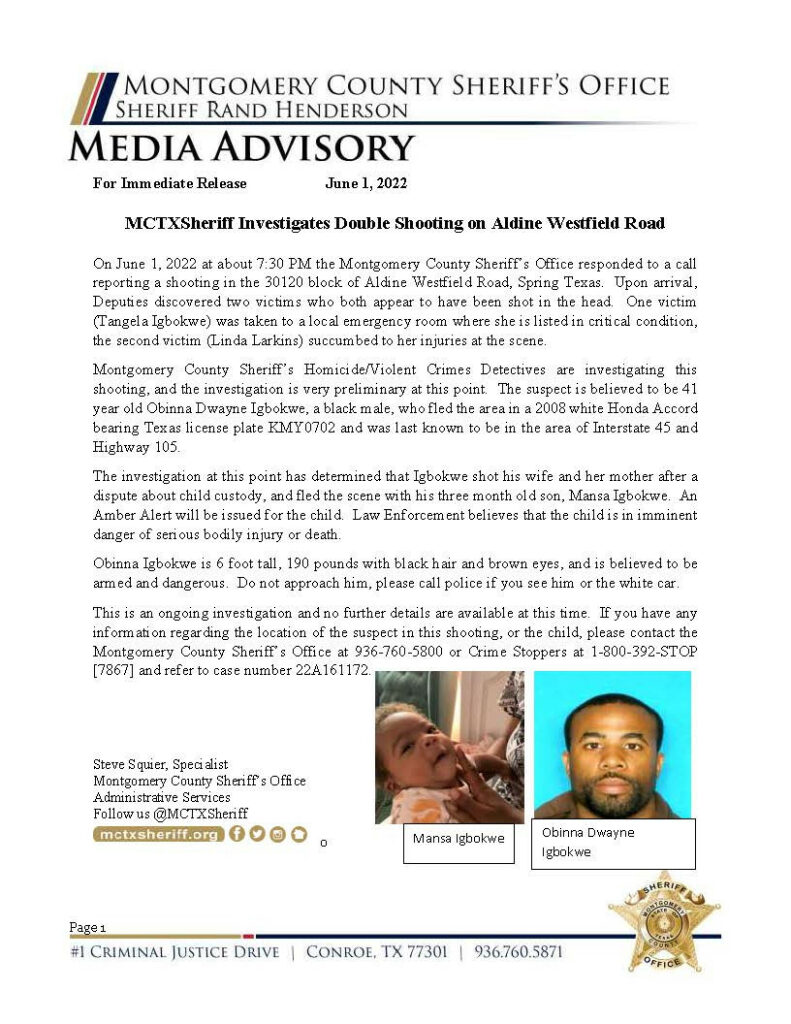