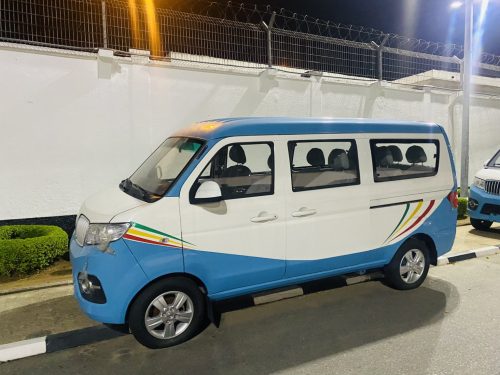 The Lagos State Government on Tuesday unveiled 500 minibusses to ensure efficient intra-city transportation in the state.

The 500 shuttle buses, known as First and Last Mile (FLM), are the first phase of the planned 5,000 minibusses aimed at boosting the transportation system in Lagos State.

Speaking at the unveiling of the First and Last Mile (FLM) Bus Scheme at Ikeja, Governor Babajide Sanwo-Olu said that buses would take care of commuting between the main transit corridors and the hearts of the communities, where the bulk of people reside and where the high capacity buses would normally not pass through.

Mr. Sanwo-Olu said that the bus scheme was an important milestone in achieving the intermodal transport system which would give the people the choices they deserved, reduce congestion and journey times, and improve the quality of life.

He said that it was also about improving and guaranteeing the security of lives and property of Lagos residents.

According to him, in February 2020, the state government restricted the operations of commercial motorcycles (Okadas) in six Local Government Areas (LGAs), nine Local Council Development Areas (LCDAs), and 10 major highways in the state.

”The full implementation of a safer and more efficient alternative transport solution, that takes out the need for Okadas and replaces them with the FLM buses, thus curbing the incidence of Okada-related crimes and robberies.

”We will continue to monitor and assess the situation over the next one-two months and tweaking our response appropriately to ensure that ultimately, we are winning the war against crime and criminality associated with Okadas.

If we do not see any improvement, we will have no choice but to go for a full and complete ban on Okada activities in the state.

”We are very much aware of the role transportation plays in the development of any economy. Indeed, it is the backbone of any thriving economy.

”Over the last two years, we have taken steps to birth and bequeath to Lagos State enduring transport infrastructure and systems, which future generations would be proud of.

”Our Bus Reform Initiative (BRI) is an ambitious road transportation effort, that encompasses a number of transport projects, including the construction of bus terminals and interchanges,” he said.

The governor said that for a successful operation of the scheme, the government had recognized the roles of the National Union of Road Transport Workers (NURTW) and the Road Transport Employers Association of Nigeria (RTEAN) as major partners in the entire Bus Reform Initiative.

He appealed to the operators of the FLM Bus Scheme to play according to the rules, as the maximum penalty would be imposed in cases where existing agreements and extant Road Traffic Laws were infringed upon.

The Commissioner for Transportation, Frederic Oladeinde, said that the unveiling of the bus scheme was a concerted effort to fulfill the vision for an integrated multi-modal transport system in the state.

He said that in line with the Transport Sector Reform Law 2018, the Lagos State Government through the Ministry of Transportation and LAMATA had put in place various measures aimed at readjusting the transportation strategies to accommodate the first/last-mile transportation system.

According to him, the first/last-mile transportation system is all-inclusive, safe, convenient, affordable, accessible, and in line with global practices.

Abimbola Akinajo, the Managing Director, Lagos Metropolitan Area Transport Authority (LAMATA), said that the First and Last mile bus scheme were small capacity (7-11) passenger buses that would travel on routes designed to take one closest to and from origin and destination.

Mr. Akinajo said that 286 routes had been identified as the FLM routes and the routes have been designed to be around 5km but always ensure that connectivity was achieved for intermodal transportation.

”For ease of operation of the scheme, the state has been delineated into eight zones. The zones are Zone 1: Ikeja and Ketu; Zone 2: Oshodi, Mushin, and Surulere, then Zone 3: Berger, Yaba, and Oyingbo.

”Immediately after the launch, operations shall commence in zones 2,3,4,5, and 7 which represent the first phase of the bus scheme.