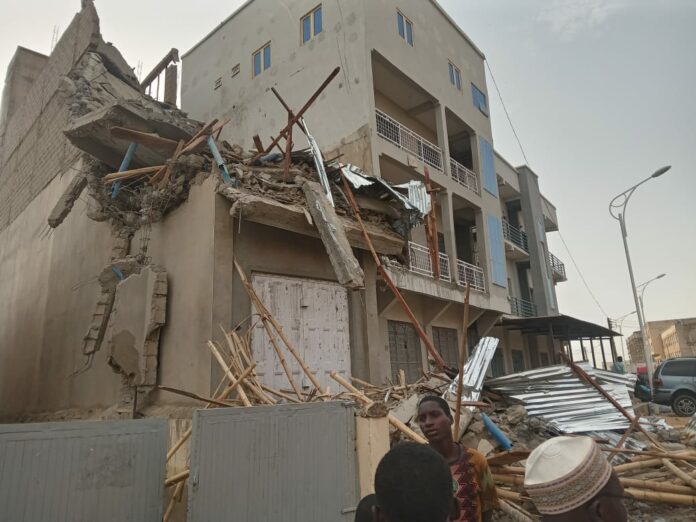 One dead as three-storey building collapses in Kano

TSB NEWS reports that At least one person has died, and another injured, after a three-storey building collapsed in the popular Kantin Kwari textiles market in Kano state.

The incident, according to eyewitnesses, occurred on Tuesday around 12:30pm.

Persons who witnessed the incident said they did not know what caused the collapse, but the building was under construction.

Two floors in the building were said to have been completed, while the third floor was under construction.

Rabi’u Yahaya, one of the eyewitnesses, said the building suddenly collapsed while traders and customers were busy.

“I was pushing my cart with some loads in it when I heard a thunderous sound with thick dust renting the air. I was a bit far from the place, but I saw when the building was collapsing,” he said.

Abdullahi said the fire service received a distress call at about 12:40pm that a three-storey building had collapsed at unity road in the Kwari textile market.

According to him, on receiving the information, the firefighters were deployed and they got to the scene at about 12:45pm.

He added that two persons were involved in the incident — one dead while the other severely injured.

Abdullahi also said the victims — who are yet to be identified — were taken to Murtala Muhammad specialist hospital.

Would You Rock Tamara Eteimo’s Outfit?