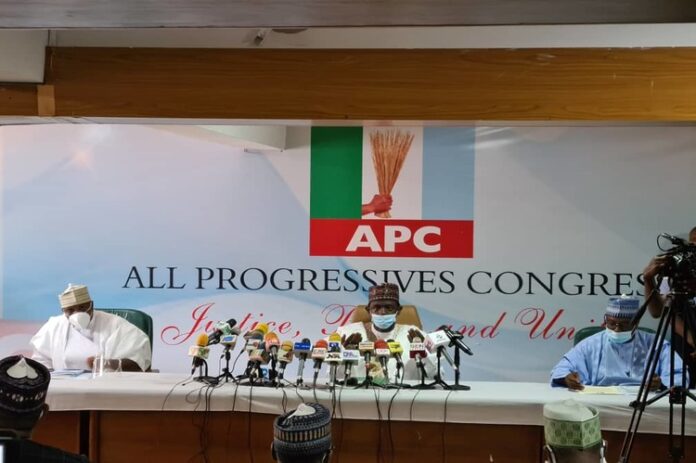 The twenty state governors elected under the umbrella of the ruling All Peoples Congress; APC has failed to choose a consensus candidate for the presidency despite appeals by President Muhammadu Buhari addressed them on Tuesday.

The governors who revel in the exalted position they now find themselves in because of their stranglehold on delegates of their remain torn apart by their different interests.

They are also bring pulled apart b by powerful outside forces in a fierce contest where Vice President Yemi Osinbajo, APC national leader Bola Tinubu and former Minister of Transportation Rotimi Amaechi are said remain the frontrunners.

Buhari is in Spain with three of his ministers who will have unfettered access to the president for days with some in APC now triggering speculations about who among the candidates the three ministers have been supporting.

The president wants the governors to rally behind a single candidate whom Buhari has not named to succeed him, but that ideal appears now to be elusive for a variety of reasons.

Firstly, the governors have among their midst four who are themselves seeking to be the APC flagbearer in next year’s crucial presidential election. None of the four including Kayode Fayemi of Ekiti, David Umahi of Ebonyi, Yahaya Bello of Kogi and Abubakar Badaru of Jigawa state is ready to flinch.

In addition, many among the state governors are angling to pick the slot of vice president and this means that their loyalty is to the presidential aspirants most likely to pick them as deputy.

Thirdly, there is the influence of the powerful but faceless cabal at the villa including two arrow heads of the group who are said to be bent on frustrating the candidacy of Osinbajo on account of the role the latter played in ending the security siege on the national assembly on August 7, 2018 and resulting sack of the security chief fingered in that operation which happened while the president was away on medical vacation.

This cabal is believed to be responsible for the proliferation of candidates from the southern part of the country but their grouse against Osinbajo is perhaps his greatest strength and reason why he commands support among Nigerians outside the APC and his Yoruba southwest.

Fourthly, there is the hitherto unknown fifth columnists from the North who are against candidates from the south, partly on the ground that the north should not be handing over the presidency 2023.

Finally, there are also those who claim they can read the president’s mind by his “body language,” and they count on nothing but their imagination in claiming they know who Buhari does not want to hand over Aso Rock to among the contenders.

For long Buhari refrained from being forceful in his quest to shape the outcome of the presidential primaries but his strong speech on Tuesday may have changed all that. Only time will tell if that change of tact had not come too late.

After the president addressed the governors on Tuesday, all attempts they made to reach the idea of a consensus has failed, BusinessDay learnt.

With elimination of statutory delegates through a fumbled amendment to the electoral act, the federal legislators handed over control over the delegates to the governors who in most cases, (excluding Lagos) handpicked the elected delegates for their respective states.

By the time the federal legislators realized that they had elevating the state governors by silencing the so-called Abuja brigade that includes them and other senior government officials, they made a sudden attempt to insert the clause allowing statutory delegates into the electoral bill, but Buhari failed to sign the amendment into law.

One major fall out of this has been the case in many states where sitting federal legislators were dislodged in their bid to return to the national assembly by candidates backed by state governors.

It is unclear how Buhari will respond to allegations that by seeking to force the governors to line behind a consensus candidate he is inadvertently rubbishing the democratic credentials of his party.