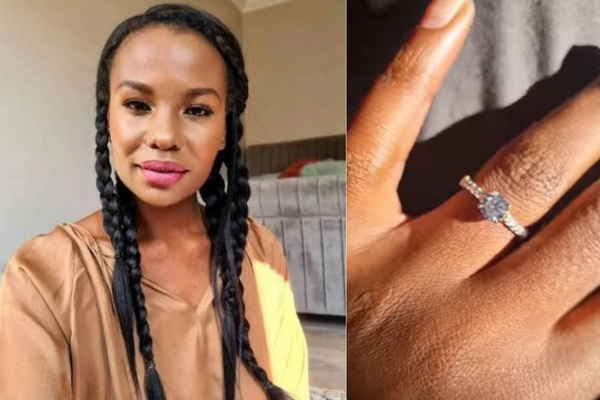 The past few years have been extremely difficult for actress Mona Monyane, but things have been changing for the better recently.

The former ‘Muvhango’ star revealed this week that she is officially engaged to her mystery man, “Mr A”.

“Abuthi a re ‘will you be my wifey. Nna ka re ‘yes I’ll be your wifey”. Rokang basadi! Rokang!” she captioned a video that showed off her engagement ring.

Mona’s friends, family, and fans flooded the comments section with messages of congratulations.

One of Mona’s followers wrote: “Congratulations Mona all the best you deserve all the happiness.”

Mona revealed in a separate post that she spent the last few years prioritising her health to deal with the pain in her life.

Two years later, Mona’s house was gutted in a fire. She lost her daughter’s ashes in the blaze.

“Losing Amani’s ashes in this fire from hell has got to be the greatest lesson of letting go I could ever have had to experience,” she wrote on Instagram.

In March 2020, Mona announced that she was separating from her husband, Khulu Skenjana, after four years of marriage.

“I know this will come as a shock to many and I ask that you continue to believe in love and family. The battles we have met have been difficult to overcome together,” she said at the time.

Mona says her road to healing has been difficult but worth it.

“I took a few years shem, to unpack, to unravel, to allow myself to truly feel pain. I took a few years to prioritize not only healing but also loving myself. It cost me a lot of friends, time, money, family… It cost me making very scary choices and decisions that considered no one else’s opinion but my own,” she wrote after her engagement.

The 32-year-old said “the darkness was real” but she never stopped believing that she deserved better.

“I deserved what my heart desired and even if I couldn’t see it in my pain. It was definitely waiting for me in my joy. The work, was getting there. Really surrendering to the higher power who I blamed for my misery at the time.

“When I wept and prayed for God to bring me a man who would love me the way I knew I wanted and deserved to be loved. I couldn’t have anticipated how that manifestation would unfold.”

Congrats, Mona and Mr A!

This is anti-christ – FFK slams fashion designer, Toyin Lawani, over...