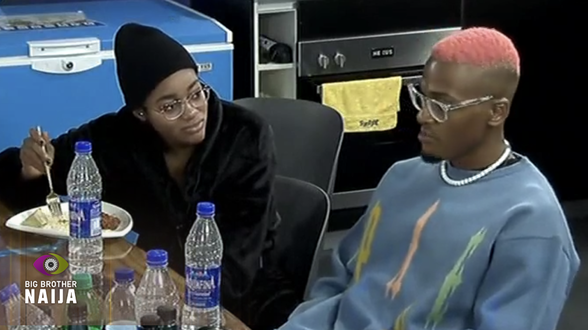 BBNaija drama: Beauty disappointed as Groovy resists a kiss from her

As BBNaija S7 housemates settle and share a connection, Beauty and Groovy in particular were quick to pair for a friendship already.

But, sadly, flirtatious moves between the two housemates met with disappointment as Groovy refused to kiss his female counterpart Beauty, leaving her feeling slighted.

Beauty has been spotted flirting around Groovy, but he seems to be treading lightly. At the Kitchen table last night, he gave Beauty a sip from his cup, before proceeding to rub her back, saying, “You seem to like massages.”

According to a report by Africa Magic, Beauty had admitted to liking Groovy, but stated she does not want to cause trouble for him, because she realises that other ladies may be interested in pursuing something with him.

Later, this flirtation took a tense twist, resulting in hurt feelings and a subsequent apology, which started when the Level Up Housemates decided to play a game of ‘Truth or Dare.’

There has been a complaint by Beauty that Groovy was being uptight and left the game. Groovy then followed her to the bedroom and tried to explain why he had declined.

Beauty dared to kiss Groovy, but for the presence of their fellow Housemates, who are noticing the connection too, the move met with resistance.

“I feel like it’s a bit too early for this”. He continued to explain his reasoning, but when Beauty didn’t seem to let it go, he told her “If I am out of the picture, would it not be easier for you to do what you’re here to do?”

After a battle of wits, which saw the duo bare their perspectives, Beauty told Groovy, “I can be cranky for other things, but not this. This whole process is a lot for me.”

After some time, Beauty asked for a chat to apologize for overreacting. Groovy accepted the apology and the pair decided to restart their friendship.

Later in the morning, Groovy made sure to get Beauty everything she needed after complaining about feeling ill. “Maybe it’s malaria. Did you get a smoothie? Do you want one?,” Groovy said.

Viewers keep an eye on these pairs, while time will tell, whether Beauty will manage to snag Groovy.

See These Intimate Photos Of The Making Of Michael Jackson’s Legendary...