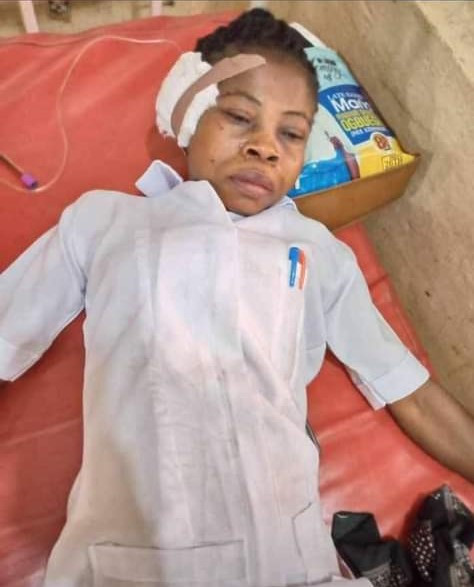 Three people including a health worker and a fruit seller were shot and wounded when police engaged suspected armed robbers in gun duel in Umuahia, the Abia State capital on Thursday, July 14.

It was gathered that the armed robbery gang had been lurking around banks located on Bank Road, Umuahia waiting for customers with large chunk of cash to attack

The hoodlums had trailed a bank customer who had made a withdrawal at the branch of the United Bank for Africa (UBA) on Bank Road.

Following intelligence information, the police in the early hours of Thursday ambushed the armed robbers.

On sighting the police, the armed robbers were said to have opened fire, leading to a gun duel. In the ensuing gun battle, about three persons were shot and wounded.

Among the injured was a female health worker identified as Apollos Theresa, who was hit by a stray bullet on her head.

A fruit seller identified as Chimuanya Joy was shot on her stomach. The third, a police officer, sustained injury during the gun duel and was rushed to hospital where he is receiving medical attention.

A resident, Tochukwu, told Nation that the said the robbers were being pursued by a police patrol van from the Aba road axis of the city but took a detour to Ibiam road after they met a gridlock around the popular FMC Junction.

It was further gathered the robbers, who rode in a Corolla SUV on getting to Factory road, rammed into a woman driving a Toyota Camry coming in the opposite directions.

The robbers fired severally into the air and later escaped with the Toyota Camry through Factory road into Afaraukwu community.

The incident, which happened at the location where many commercial banks in Umuahia are situated, forced them and offices around the area to abruptly close for business.

Spokesperson of the Abia State Police Command, Geoffrey Ogbonna, who confirmed the incident said it was not a case of bank robbery.

e incident, which happened at the location where many commercial banks in Umuahia are situated, forced them and offices around the area to abruptly close for business.

Spokesperson of the Abia State Police Command, Geoffrey Ogbonna, who confirmed the incident said it was not a case of bank robbery.

“It wasn’t a case of a bank robbery attack. What happened is that some of these armed robbers who trail people coming from the banks – people who go to banks to make withdrawals. They will trail them because it happened recently. They will trail their target to where it will be conducive for them to strike and they will strike,” he stated.

“So that was what happened today. Our people who were on patrol in that area were able to intercept the gang and on sighting the police, they engaged them in a shootout and they were able to escape, abandoning their operational vehicle. The police recovered one AK-47 rifle from them as well as a vehicle and one machete. A stray bullet hit somebody who sells something nearby and even one of our colleagues (police) had a slight touch of their bullet,” he added.