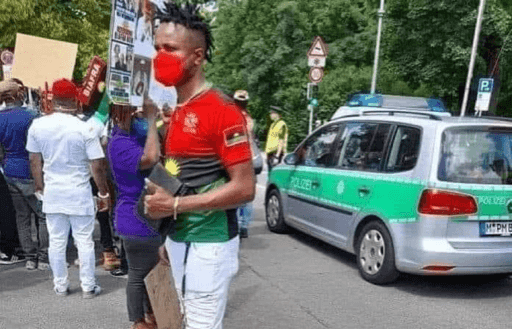 The media office of Peter Obi, presidential candidate of the Labour Party (LP), says Oseloka Obi did not step on Nigeria’s flag.

The media office was reacting to tweets that went viral over the weekend which had the picture of a man standing on Nigeria’s flag, with claims that the person is Oseloka, Obi’s son.

“Oseloka Obi, Peter Obi’s son, standing on Nigeria Flag and putting on IPOB T-Shirt. Today, his dad wants to be President of Nigeria,” a tweet by @OfficialPigo reads.

Reacting in a statement on Sunday, the LP presidential candidate’s media office described the tweets as “desperation of the opposition”.

“Everyday, the desperation of the opposition is becoming stronger,” the statement reads.

“Their latest mischief is the circulation of a picture, most probably contrived, of a young man in Biafra apparel standing on Nigeria’s flag and passed it as Mr. Peter Obi’s son.

“We wish to state that the said young man is not Mr. Peter Obi’s son, who, by his strict upbringing marked by rigorous discipline, understands what civic duty and responsibilities entail.

“Mr. Oseloka Obi is about six feet and taller than his father; while the young man they used for the mischief is slightly above 5 feet.

“The Peter Obi Media office calls on those seeking elective posts and their supporters to always be guided by the right ethics at all times.”