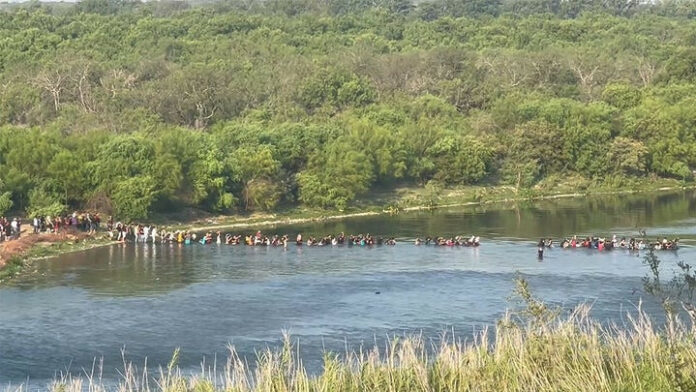 Hundreds of illegal migrants have been captured on camera crossing into the United States through the southern border in Texas.

This reportedly marks one of the largest groups to flood into the U.S. in recent months.

In the video shared on Twitter by Fox News reporter Bill Melugin, hundreds of illegal border crossers were being guided into the water by smugglers at the river in Eagle Pass, Texas, on Wednesday, July 14.

In another tweet, Melugin revealed that when the group first entered the water, no Border Patrol officers were on scene, “only one Texas National Guard humvee.”

Federal sources told Fox there were 2,258 illegal crossings in Del Rio Sector on Tuesday alone. Over a seven-day period, there were more than 13,000 crossings in the sector.

Texas lawmakers immediately accused the Biden administration of enabling the crossings, and called on the White House to work with Congress to stop the border crisis.

“This is one of the biggest groups we have EVER seen at our southern border. The time is now for this Administration to work with Congress to disincentivize this dangerous mass migration,” Rep. Tony Gonzales (R-Texas) tweeted.

BREAKING: One of the most massive single groups we have ever witnessed cross illegally at the border is crossing into Eagle Pass, TX right now. The line of people went so far into the trees it’s hard to get a count. Hundreds upon hundreds. Coyotes guiding them in water. @FoxNews pic.twitter.com/ZjZIygarAv

California makes it illegal to remove condom during sex without consent