Another hilarious celebrity throwback photo has made it to the online community and this time around, Marlian Music artiste, Zinoleesky is involved.

The Kilofeshe crooner had taken to his Instasotry channel with the image which appeared to have been taken some years ago.

Zino was spotted at an ‘owambe’ function but the young man was not alone. From indications, he was making away with some bottles of soft drinks when the image was captured.

Social media users react As expected, the photo got fans of the singer talking on social media and some of them used the opportunity to mention the importance of not giving up on one’s dreams.

Read some comments sighted below: charles_fearbaby said: “They didn’t believe in us but God did .”

iam_jnrdaniel said: “If I give up, make e no better for my ex any where she dey.”

classy_commy said: “Omo the person wey bring out this photo no good at all.”

iamkingdinero2 said: “The most unfair throw back celebrity photo .”

charles_fearbaby said: “Why should I give up?”

wilfredanderson07 said: “If i tell am say he go smoke loud in the future he will not believe.”

yankoman said: “This picture is not up to 5 years.” 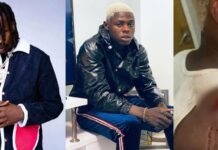 Naira Marley Would Have Been A Tomatoes Seller If Not For...