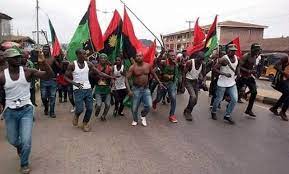 The Indigenous People of Biafra, IPOB, has placed a N2 million bounty on the Commander of Ebubeagu security outfit.

IPOB issued the bounty while declaring the Commander of Ebubeagu in Imo State wanted for the murder of 14 youths in Otulu and Awo-Mmamma area of the state.

A statement by IPOB’s spokesman, Emma Powerful, said the Eastern Security Network, ESN, in Imo State has been given a matching order to “fish out” the Ebubeagu Commander in the state.

The separatist group also linked the Imo State Governor, Hope Uzodinma to the killings in the state.

Check Out The List Of Traffic Offences & Fines For Nigerian...