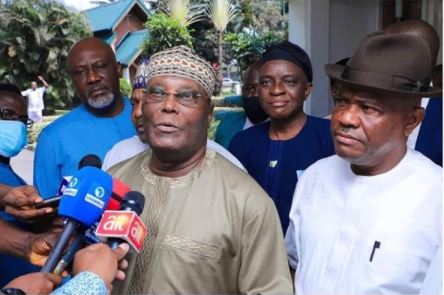 The Peoples Democratic Party, presidential candidate, Atiku Abubakar on Friday described Governor Nyesom Wike as the Jagaban of the party.

Atiku said he holds Wike in high esteem, stressing that he is a man of revolution.

He disclosed this through the spokesperson of his presidential campaign, Segun Sowunmi, on Arise Television.

He stressed that the Rivers State governor is a straightforward person who says things as they are.

“Wike is our own Jagaban; how do you explain a governor being able to keep other governors in line? One thing you can’t deny him is that he has the ability to say it as it is. He will not bend or colour things.

“Atiku holds Wike in high esteem, time and space may not bring them together, but he does. Wike is a man of revolution; he is one of the totems of PDP,” he said.

There are claims of crisis within the PDP following Atiku’s selection of Governor Ifeanyi Okowa of Delta State as his running mate.

Fillers have it that Wike and some PDP members are aggrieved that Atiku picked Okowa ahead of Wike, who came second during the party’s presidential candidate.