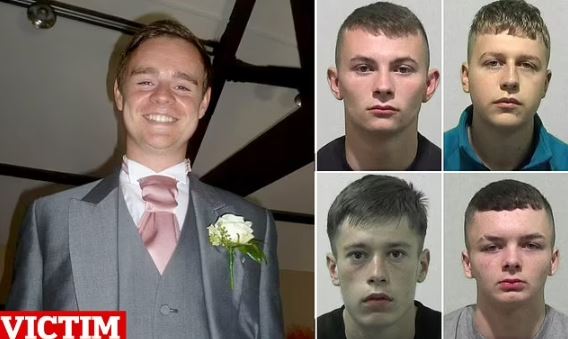 TSB News reports that a teenager has been convicted of murder and four others were found guilty of manslaughter after they after they mocked a father for looking like Ant McPartlin as he walked home from the pub with his partner.

They had shared a joke with Daniel Humble (left), 35, that he looked like the TV presenter Ant McPartlin moments before the attack on Friday, May 28, last year. Mr Humble had been out with partner Adele Stubbs for a meal and drinks in Cramlington, Northumberland, after lockdown rules were relaxed. The teenagers (right), then aged 16 to 18, surrounded the father-of-two near an underpass, repeatedly kicked him on the floor and left him with a ‘catastrophic’ head injury.

The jury cleared his co-defendants of murder but found them guilty of manslaughter.

They were 18-year-olds Ethan Scott, of Chester Grove, Blyth; Kyros Robinson, from Woodside Avenue, Seaton Delaval; Bailey Wilson, of Mitford Avenue, Blyth; and a 17-year-old who cannot be identified by the media due to his age.

Moments before the attack, Mr Humble was the subject of a joke when one of the teenagers said he looked like Ant McPartlin from the television duo Ant and Dec.

It was received in good humour and it wasn’t the first time he’d heard it. But shortly after, Mr Humble tried to punch one of the group, then aged 16, before he himself was knocked to the floor.

The court heard Mr Humble and Miss Stubbs had visited a number of venues that night, including a restaurant called the Mandarin Bay and pubs, including the Blagdon Arms.

When You Overpaid Someone Via Transfer, Did You Get Your Money...