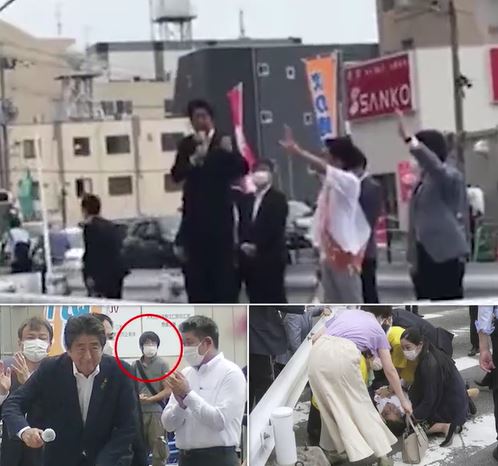 Abe, the country’s longest-serving leader, was shot twice as he gave a speech in the city of Nara at 11.30am

This is the shocking moment former Japanese prime minister Shinzo Abe was shot dead – revealing how oblivious security guards tried to block bullets with their briefcases after realizing too late that he was under attack.

Cameras trained on Abe as he gave a political stump speech in the city of Nara at 11.30am captured the moment the first shot was fired, missing the politician but producing a loud bang and a cloud of smoke.

For what feels an eternity, but in reality is just a few seconds, Abe remains on his podium as bewildered guards – who were all looking at him as he spoke – turn around and finally grasp what is happening, just a moment too late.

Panicked, they try to put themselves between Abe and 41-year-old gunman Tetsuya Yamagami, with one even flinging his briefcase in a lame attempt to stop what they all know is coming.

Abe turns too, and may have caught sight of his attacker for the briefest of moments before the second fatal shot is fired: Causing his shirt-front to ripple as pellets tear into his neck and chest, burying themselves in his heart. 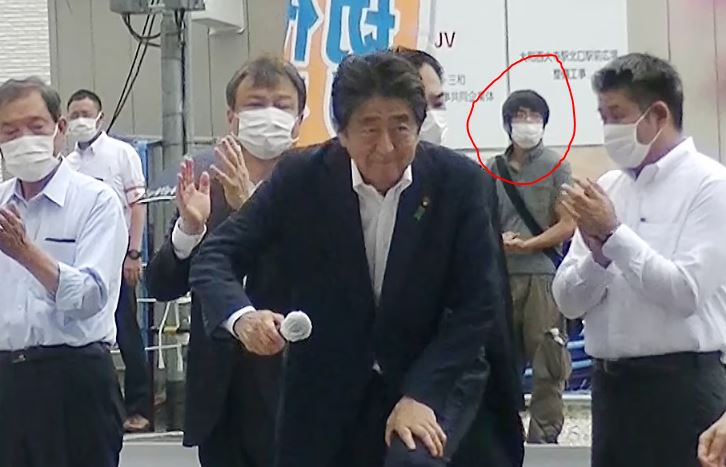 The image shows former Japanese prime minister Shinzo Abe taking to the stage with microphone in hand to make a speech while in the background, in a faded green t-shirt, green fatigues and a mask concealing his bespectacled face lurks gunman Tetsuya Yamagami, 41, who would shoot and kill Mr Abe moments later 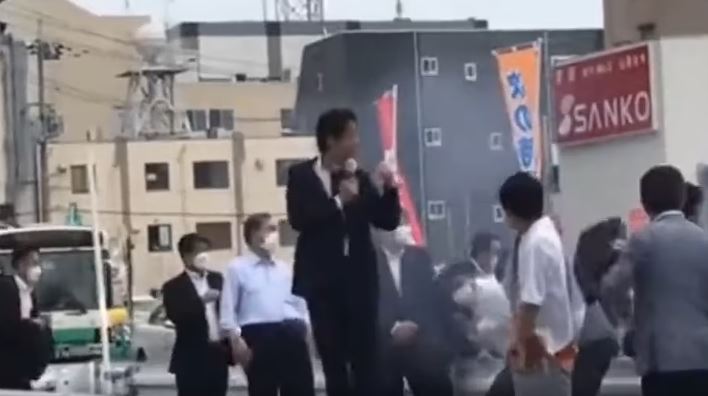 He is not immediately knocked unconscious, but stumbles off the stump and collapses to his knees before slumping over. Guards run to his side, and later images show how they began chest compressions in a vain attempt to revive him. He died several hours later in hospital from massive blood loss.

Yamagami was tackled to the ground and arrested, with police saying he has confessed – telling them he wanted to kill Abe because he was a member of a ‘specific organisation’ that he disagreed with.

Police say Yamagami had amassed an arsenal of home-made weapons similar to the one used in the attack at his home, along with a number of explosives which have been taken to be destroyed. 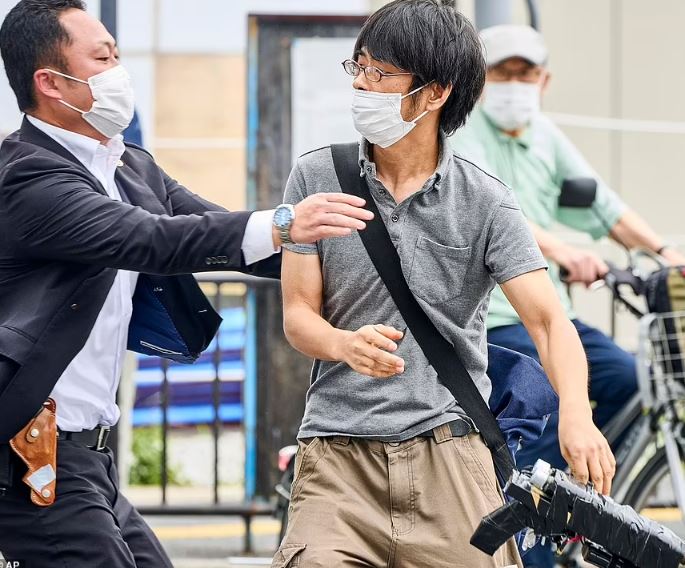 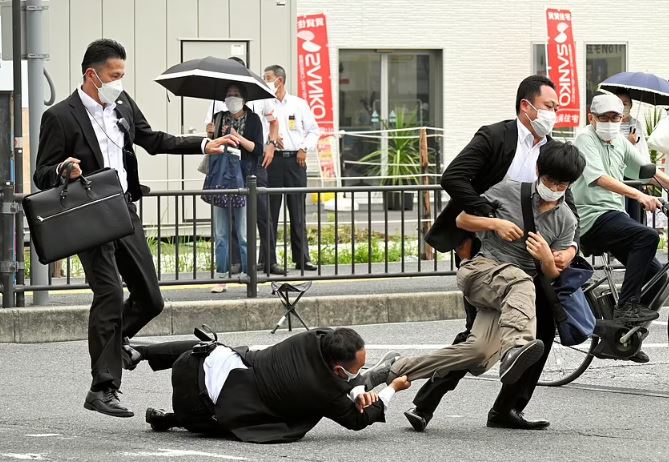 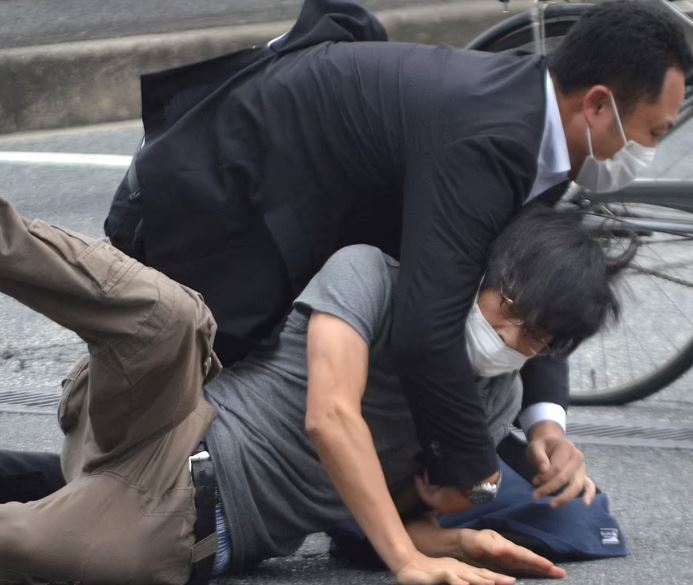 It is not clear exactly how he learned to make the weapons, but he is a veteran of the country’s defence forces, having served in the navy between 2002 and 2005. 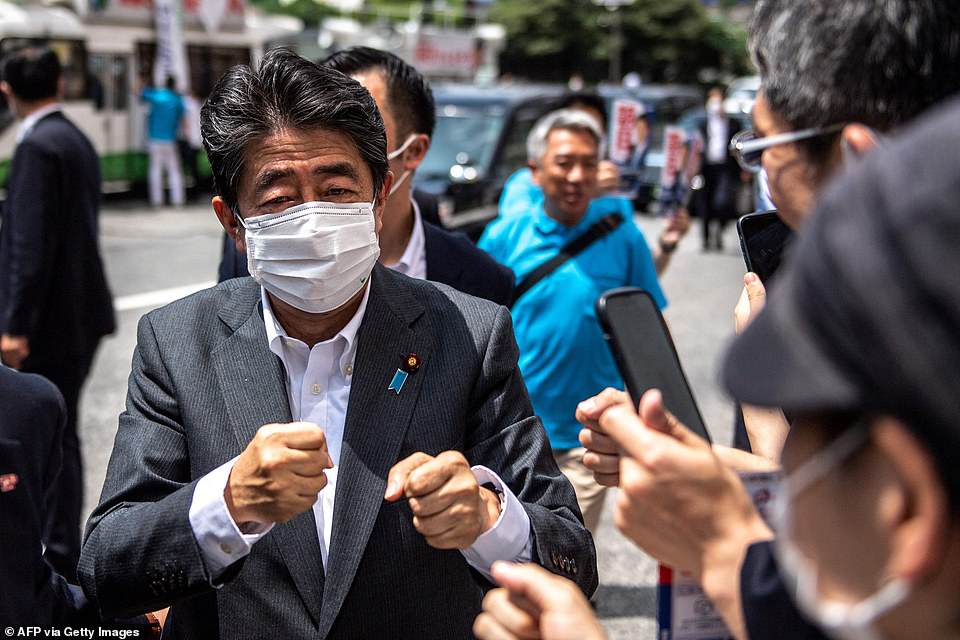 Earlier in the day, Abe was  in good spirits as he  interacted with supporters before his speech ahead of the House of Councillors election on July 10