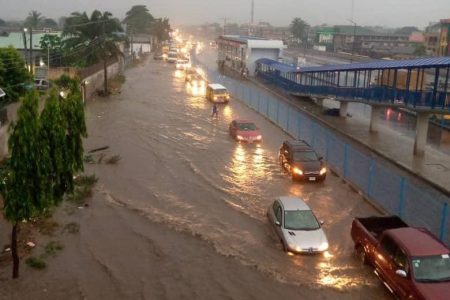 Tragedy as heavy flood sweeps danfo driver, Ugo, with his bus in Lagos

Tragedy struck on Friday at Yaya Hassan Street, Egbe-Idimu Local Council Development Area, LCDA, when a commercial driver, simply identified as Ugo, 48, Alias, “Gunners” was swept away to his death by heavy flood during the persistent rainfall in Lagos.

According to eyewitnesses, the unfortunate incident occurred at about 4pm, during the heavy downpour.

The incident threw the entire community into panic as residents and motorists wailed openly, running helter skelter in fruitless search effort to recover the victim.

As of press time, 7.30 pm, family members of the victim, who hails from Abakaliki, were seen in frantic effort in search of their loved one with the hope of finding him alive.

It was gathered that the victim, a commercial bus driver with registration number, MUS 760 XS, popularly called “Danfo” was looking for a big stone around to use as a wedge on the tyre of his bus which broke down in the heavy rainfall when in the process of fetching one, he mistakenly fell into the wide drainage with high water current.

When newsmen visited the scene the commercial bus with yellow and black stripes, Lagos colour which the victim drove before the incident happened was still parked in the middle of the road as sympathisers and rescue team went in search of the victim.

The conductor of the bus, simply identified as Favour, left the scene and raced to the home of the victim to inform the family of the tragedy.

An eyewitness, who simply identified herself as Mama Iyabo, narrated how the incident happened.

According to her, “I can’t still believe my eyes. It was just like a Nollywood movie. I was in my shop as a petty trader, I saw from afar a commercial bus driver while in the process of negotiating a bend into the street got stuck in a ditch but after much struggle, it got the bus out.

“However, the bus wouldn’t start again, apparently due to the impact of falling into the ditch, coupled with the heavy rainfall.

“In the process of fixing the bus, the driver went in search of something, which i later found out was stone inorder to hold the bus stationary.

“There is a stone there (pointing to the stone) he was actually trying to jump over the drainage to get the stone when he mistakenly lost his balance and fell instantly into the high moving current of the flood water in the drainage.

“All I could see next was the man’s head slightly above the flood water struggling, crying for help. There was a youngman who tried to no avail to get the drowning man out as he was being swept away.

“Immediately, all the passengers hurried out of the bus and dispersed into thin air while others watched as rescuers went in search of the victim.