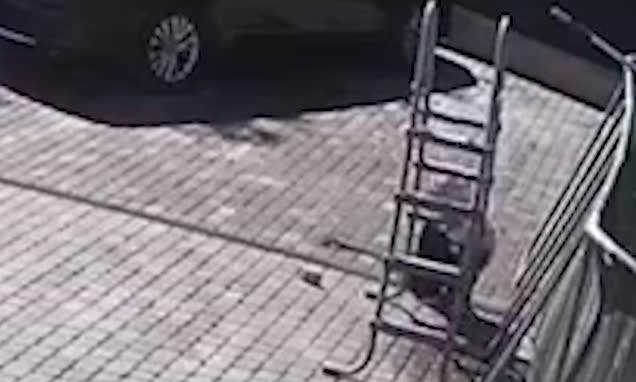 Ukrainian refugee girl, Paulina, is fighting for life after being attacked by a MONKEY: Child is saved by parents but suffers huge blood loss after animal escapes Moscow zoo

An escaped monkey brutally attacked a Ukrainian war refugee girl after escaping from a private zoo in Moscow, leaving the girl fighting for her life.

The animal is seen on video viciously biting the helpless toddler as her parents fight to free her from the grip of the escaped pet.

The girl called Paulina is now in intensive care after the horrific ordeal in an elite village near Russia’s capital. Her wounds are described as ‘severe’.

She suffered lacerations of her arms and legs, and serious blood loss.

The girl’s mother and father heard her screams and rushed to rescue her. But the monkey kept attacking her even as she was pulled away from the primate.

‘The parents came running to the screams and with difficulty freed their daughter from the animal’s clutches,’ said one report.

The monkey had escaped from a ‘pet zoo’ belonging to a millionaire in a next door property and scaled the fence.

It then attacked Paulina who was on a stepladder close to a garden swimming pool, with the incident being captured on CCTV footage.

Other children are seen running away, leaving the money alone to attack the small girl. Footage shows the monkey dragging the child to the ground, pinning her down.

The girl’s mother is shown running from around the side of the pool, grabbing her daughter and desperately pulling her away from the monkey.

The creature clings on to the girl even as the mother pulls her away, causing the primate to swing around as it tried to keep hold of its prize.

She is able to free her daughter for a matter of seconds before it lunges at them again, at which point the girl’s father is seen joining the fray. He tries to kick the monkey away from his wife and daughter, but the monkey is undeterred.

At this point, it appears the parents have been able to fend the money off. They walk out of sight of the camera, but the monkey chases after them, again grabbing hold of the little girl and attempting to drag her from her mother’s grasp.

While the parents were eventually able to free their daughter from the monkey, Paulina suffered from severe injuries and was left in intensive care.

The victim was described as a refugee child from the war in Ukraine.

The girl’s parents are friends of the owner of the house where the attack took place.

They had given the family refuge from the war started in February by Russian president Vladimir Putin.

Police are now investigating the attack after the parents made a complaint about the horrific attack.

The zoo is said to be owned by the wife of a prominent Moscow lawyer.

A criminal investigation is underway.

Mother of six insists she has no regrets over affair with...