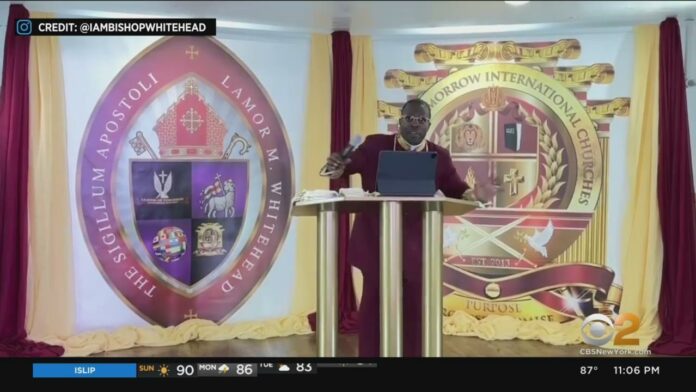 US Bishop, Lamor Whitehead, who was robbed during service charged for stealing member’s $90,000 life savings

A Brooklyn-based pastor in New York, Bishop Lamor Whitehead, who was robbed of more than $1 million in jewellery during a livestreamed church service, has been charged with stealing $90,000 from a member of the congregation in 2021.

A lawsuit filed in Brooklyn Supreme Court accused Whitehead of persuading Pauline Anderson, a 56-year-old woman, to put almost all of her life savings into one of his businesses.

Whitehead convinced Anderson to get the money on the pretext that he wanted to help her procure a home despite her poor credit records.

According to the suit, reported by New York Post on Thursday, Whitehead agreed to pay Anderson $100 per month because her savings were her only source of income.

Early last year, after months passed without the regular instalments or any movement on the home purchase, Whitehead reportedly notified Anderson that he was treating her investment as a contribution to his then campaign for Brooklyn borough president.

NYP disclosed that Anderson discovered that the pastor used the funds as down payment on the contract to purchase a $4.4 million home for himself in Saddle River, New Jersey, when he unintentionally sent an email about the purchase to her son, Rasheed, who had initially connected them.

The acquisition of Saddle River did not materialised. However, Whitehead bought a $4.5 million apartment building in Hartford, Connecticut.

According to the lawsuit, Whitehead told the woman afterwards that he had no duty to repay the money because he was investing it in his business, leaving her with nothing but a vague promise to pay the funds back in the future and then an assertion that he had no further obligation to do so.

For Whitehead’s “morally repugnant activities” and for “losing her whole life savings,” Anderson is requesting $1 million in compensation, according to the petition.

The case is still pending in court.