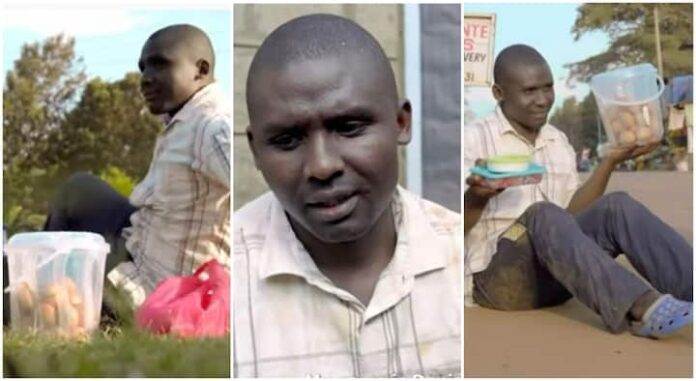 “With My Masters Degree, I Applied for 5000 Jobs And Was Rejected”: Video Shows Educated Man, Dennis, Hawking Eggs

Denis, a Kenyan citizen who has a masters degree has cried out in a video after his inability to find a job despite possessing fine qualifications.

Dennis who graduated from the University of Nairobi has resorted to hawking eggs and tomato sauce on the streets so as to survive.

His story has melted the hearts of social media users as many find it hard to believe that such an educated man could be nearly idle.

Despite possessing a masters degree and a horde of other excellent qualifications, a Kenyan citizen identified as Dennis hasn’t been able to find a job.

After finishing his first degree in 2013, Dennis found a job but decided to proceed and obtain a masters which he successfully did in 2018.

Since the time he bagged his second degree and a horde of other beautiful certificates, the young man who is 39 years old has been unable to land a job.

Narrating his story in a touching video shared on YouTube by Afrimax English, Dennis said he has applied to as many as 5000 jobs but has been unsuccessful in all of them.

To survive, Dennis who studied Economics and Business has turned to egg vending, selling boiled eggs and tomato sauce on the streets of Nairobi.