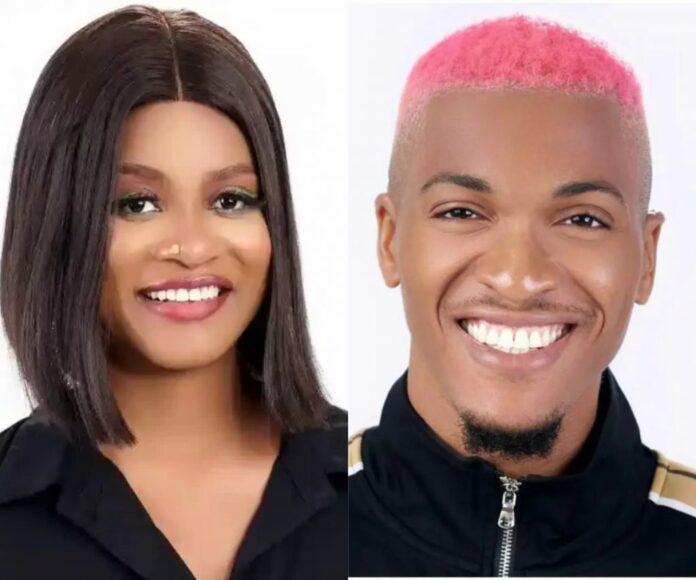 Both housemates seem to have gotten close just few days after Beauty was disqualified from the ‘Level up’ house.

Recall that the beauty Queen was disqualified after she received double strike for provoking Groovy.

However, barely six days after Beauty’s exit, Groovy seems to have moved on as he was seen cuddling under the duvet with Phyna last night.

This stirred reactions from BBNaija fans who expressed disappointment in Groovy for moving on so fast after Beauty’s disqualification.

Here are some comments gathered by Tsbnews from Twitter:

@Dami “Groovy was with Beauty because he saw she’s a strong housemate and will have a strong fanbase, the minute she left he moved to Phyna because he’s noticed she’ll have a big fanbase outside. We’ve caught you.”

@Doffishal “Groovy and Phyna under the sheet just one week after Beauty was disqualified because of him. This life no balance.”

@Blaqpearl “Women let’s not support nonsense, we all know how this will hurt Beauty, I am not her fan but we are humans, she literally got evicted because of this guy and moment after she left the other girls were all over him.”

@D_Paulo1 “Biggie you have to start putting cameras under duvet. Cos phyna and Groovy.”

@Vahcelia “This is really embarrassing for Beauty, you deserved better.”

@Ugbest “Phyna was just vibrating because she didn’t expect groovy will cuddle her they didn’t have sex though.” Chike reveals why he will never advise someone in love again

Champions League; ‘I Have No Idea How To Stop Messi’ –...