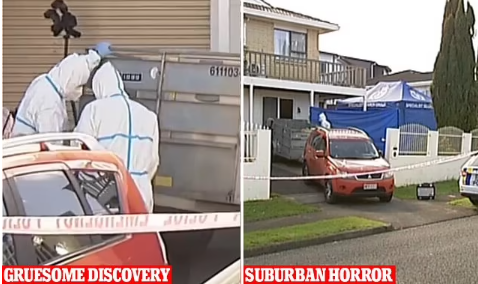 The bodies of two young children found stuffed inside suitcases were likely there for years, cops have admitted, before an unsuspecting family bought the luggage at an abandoned storage unit auction.

A family from Manurewa, in Auckland, New Zealand, bid in an auction on August 11 and won the unit’s contents before making the shocking discovery that human remains were inside.

New Zealand Police Detective Inspector Tofilau Faamanuia Vaaelua on Thursday said police believe the children’s bodies, who are between five and ten-years-old, may have been inside the suitcases for between three and four years.

The family who bought the items from the storage unit are not involved in any way.

The family had bid on the contents of the storage locker online, a common practice for storage sheds with unpaid rent, which was even turned into a popular US reality TV show, Storage Wars.

Buyers are not allowed to rifle through the contents in depth before the auction and must bid blindly on the unit.

When they win the auction, they are then allowed to properly look through the unit.

In the case of the Kiwi family, it was when they brought the suitcases home that they made the chilling discovery.

Inspector Vaaelua said CCTV would be analysed but admitted police were in for a challenge, given the length of time the bodies were stored for.

He confirmed there were relatives of the victims living in New Zealand but the children are yet to be formally identified.

My jealous husband removed my eye and cut off my fingers...