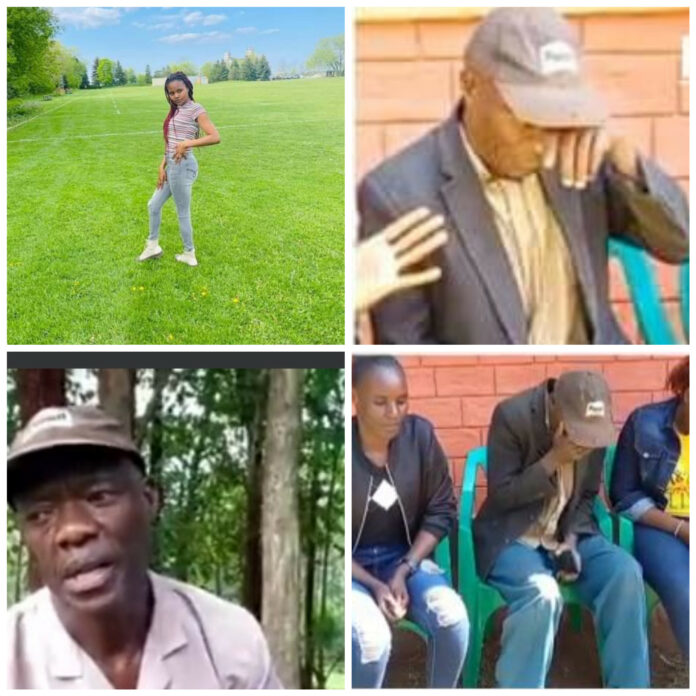 The father of 24-year-old Kenyan woman, Hellen Wendy Kemunto, who drowned in Canada, has spoken for the first time since her tragic death.

It will be recalled that the nursing student died last Thursday while live-streaming herself swimming in a pool.

Speaking in a video shared on Facebook, 55-year-old John Nyabuto Kiyondi, said he was overcome with emotions as he painfully watched his daughter’s life come to a stop after drowning in a swimming pool.

The father of six says he did not first realize why the video was trending.

“I watched the clip from my phone. I saw it was my daughter swimming excitedly. I did not see anything unusual,” he said.

He said he missed the few final moments where Wendy drowned before the live footage went silent until someone from Canada called him to convey the news of her demise.

“Reality hit me when a Kenyan from Canada called and explained to me that my daughter drowned as documented in the sad clip while swimming. I was so shocked and couldn’t stop crying,” he added.

The father also revealed that Wendy, who was studying nursing, left home five years ago and had not returned since.

“She is our firstborn daughter. She travelled to Canada in 2018 and was studying nursing. Wendy was my only hope.”

Speaking further with Nation Kenya, he said she had applied for and won a chance to live in Canada, the equivalent of the US Green Card.

“While in high school, she used to tell me that she harboured the dream of going overseas. One evening, she came home and told me she had won herself a ‘Green Card’ to go to Canada. She asked me to help her raise her airfare. I went to a local chama, borrowed some money and together with what I had saved, we saw her off,” Mr Nyabuto said.

While in Canada, according to the father, Hellen was determined to see their family back in Kenya prosper since she knew they were struggling.

During her free time, she would take up extra jobs and the little she could get, she could budget it well for her upkeep and the remaining could be sent home to support her family.

“I struggled to teach her with my wife until she was blessed to travel abroad. She has since been supporting us and was even paying her own school fees. We had started gaining stability. I’m now back to square one,” Nyabuto said before breaking down..

Photo Of The Man Who Died After Intimacy With Four...