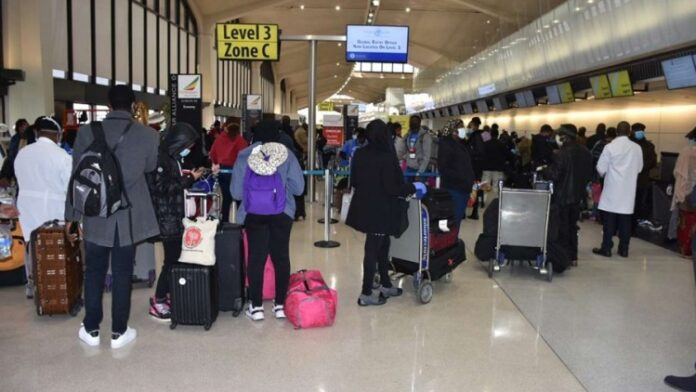 Nigerian companies are set to lose a huge number of their staff in August and September due to mass resignations as foreign schools resume academic activities in September 2022. This is according to findings by Nairalytics from Human Resource managers across the country.

We are currently heading into a month where most foreign schools in the likes of the USA, Canada, Uk, and Australia are resuming academic activities, and with many Nigerian youths pushing to leave the country by applying for study visas, companies will be dealing with a number of vacant positions come August.

The concept of “The Great Resignation,” also known as Big Quit or Great Reshuffle, which became popular in 2021, when employees voluntarily resigned from their jobs in mass is already playing out in Africa’s biggest economy as HR managers revealed that they have processed a number of resignations in the past one month, most of which are due to traveling out.

Nigeria is currently ravaged by a number of socio-economic issues, some of which include insecurity, high cost of goods and services, and unemployment amongst others. Nigeria’s inflation rate is currently at 18.6% as of June 2022 one of the highest in Africa, while the unemployment rate stands at 33.3% as of December 2020, with an estimate of 40 million Nigerians without jobs.

This is coupled with the 5-month-old strike action by university lecturers as well as other security challenges affecting the country. A recent article released by Nairametrics revealed that Nigerian youths are looking to “japa” using study visas, a term used to describe traveling out of the country, in search for greener pasture.

What Human resource managers are saying

In various discussions with human resource managers, the following comments were made concerning resignations in their companies in the past one month. According to the survey of HR operators, the sales and marketing department recorded the highest number of resignations in the month of July, followed by employees in the core operations section of the business.

According to HR in a company operating in the oil and gas industry, four employees resigned from their organization in the month of July, all of which are traveling abroad either as a result of foreign offers or on education visas.

He said, “So my present industry is oil and gas, 4 employees have resigned in the month of July, while in my previous organization which is a manufacturing firm (I left 3 months ago) they have had 15 resignations this month and still counting.”
Another stated that “two people in my office have resigned because they are relocating out of the country.” Also, a company operating in the Fast Moving Consumer Goods (FMCG) industry revealed that 30 people resigned in July, many of which cited relocating abroad as their reason for resignation.
In a conversation with a Human Resource person at an IT firm, she explained that she has only been working in the firm for one month and have had to process about 10 resignations within the period.

In the last one month of being here, I’ve done like 10 exit interviews and that’s within a particular 2 or 3 departments in the company,” she said.

“We are a team of 30 currently and we’ve had 2 resignations till now, both of them are japaing,” those were the words of an HR from a logistic tech company.
While the comment above is not exhaustive, the number of resignations recorded by the interviewed companies across various sectors of the economy, varied. Some of them had to process ten resignations in July, others five, another stated 12, while a manufacturing company has processed 32 resignations in just one month.

Several other human resource managers of large Nigerian companies particularly in the utility sector who spoke to Nairametrics also complain of a massive wave of resignations. For some of them who prefer to remain anonymous as they fear revealing the name of their organization could affect their ability to attract more talent, they opine even an increase in salaries or better working conditions did not stop their best talents from resigning.

“We have even seen senior managers and other top executives resign and travel with their families” an HR expert with a major utility informs Nairametrics. “These days they take all sorts of project management exams and often work late to remain focussed on their studies. In fact, an easy way to know who will japa is when they start telling you they have exams to write”.

Economic conditions making things worse
The crushing depreciation of the naira and its heightened insecurity have also created a sense of urgency for a lot of young Nigerians looking for a better life.

Even when they are offered a promotion or increase in salary a simple conversion into dollars shows just how paltry the money is compared to earning in hard currency.
Remote working has also given Nigerians an inkling of what it is like to earn hard currency while working locally.

However, it appears that is not enough for some who seek a better life. Beyond just earning dollars and living in Nigeria, some worry about insecurity, health care and quality of life, all of which are lacking in Nigeria.

What this means for Nigerian companies
Whilst this Great Resignation could be a headache for some organizations, it could also mean that employees at the low-level rank in the company will receive promotion opportunities in order to fill the vacant positions.

Companies will be able to place value on their loyalists going forward, which could attract pay rises for the employees.
Some companies could be tempted to pay their employees in USD, to keep their best hands from fleeing.

This could also be an opportunity for unemployed Nigerians to get a shot at being employed.