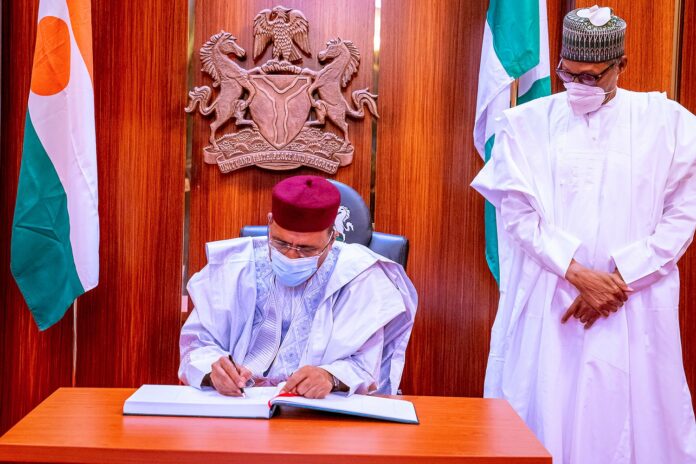 Recall, that the federal government had on Wednesday August 3, 2022, confirmed that President Muhammadu Buhari’s regime disbursed N1.4 billion to Niger Republic for the purchase of vehicles for security purposes.

The Minister of Finance, Budget, and National Planning, Zainab Ahmed who gave the confirmation, explained that providing intervention to the neighboring Niger Republic is not new and it is the prerogative of President Muhammadu Buhari to approved such purchase.

However, report has revealed that the Nigerien Minister of Defence, Alkassoum Indatou, rebutted President Buhari’s claim, saying that it was only Zamfara State Governor, Bello Matawalle that gifted the Maradi region 5 Hilux Vans, which four of the vehicles have already been received by Nigerien government.

Indatou who spoke on behalf of his country’s President, insisted that the claim by the Federal Government of Nigeria is untrue despite the efforts of its troop to protect Nigerians from terror attacks from Boko Haram and Al-shabab militants.

The Defence Minister of Niger reiterated that it was only Governor Matawalle who gave the Maradi region Hilux vans, not the Buhari regime as claimed by Nigeria’s Finance Minister.

“It is only the State of Zamfara which has given five vehicles to the Maradi region, four of which have already been received, it is not the federal government as the Minister of Finance of Nigeria Zainab Ahmed declared,” said a translation of the French statement of a top Nigerien official privy to the issues.

“The populations of Zamfara who are on the border with Niger call more on the Nigerien soldiers who respond to the minute than even those of their own country,” he added.

However, an independent journalist, David Hundeyin had posted the photo of a budget office document showing the payment of N1.15 billion, questioning why the government made the payment.

He asked President Buhari to explain why “scarce” public sector resources were being expended on Niger Republic without it appearing “on official Budget Office documentation.”

The document generated reactions from many Nigerians online, with many questioning the federal government’s generosity to the neighbouring country when public universities in Nigeria remained closed for months over the inability of the government to meet up with the demands of ASUU.

The Minister had responded to questions at the end of a weekly Federal Executive Council meeting presided over by Buhari at the Council Chambers, saying Nigeria had a policy of assisting its neighbours to strengthen capacity to deal with insecurity.