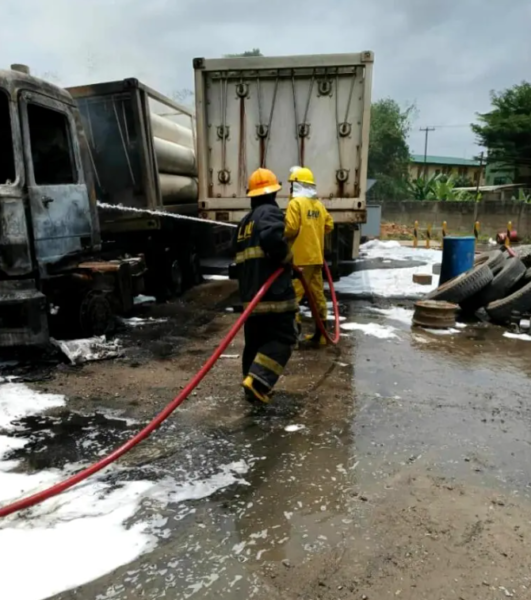 There was anxiety along Lagos-Ibadan Expressway on Monday, as a truck laden with gas, reportedly burst into flame beside the Redeemed Christian Church of God, RCCG Camp.

Reports from the axis said people scampered for safety as the fire raged and affected some other trucks parked at the scene.

The incident occurred at about Noon but emergency responders from Lagos and Ogun States have swiftly contained the fire.

It was learnt that no life was lost and nobody sustained injuries.

It was gathered that the incident occurred at a gas station where many gas trucks were stationed beside the RCCG Camp as a spark was noticed from one of the trucks batteries which resulted into an explosion which affected some of the trucks. 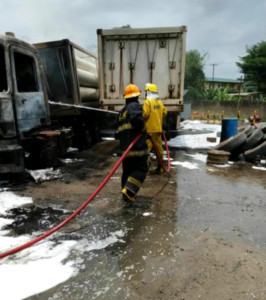 It was gathered that the prompt arrival of emergency responders prevented further damages as the fire was contained and damping ongoing.

The Permanent Secretary, Lagos State Emergency Management Agency, LASEMA, Dr Olufemi Oke-Osanyintolu who was among the first responders at the scene said this, “The The Agency, led by the Permanent Secretary, responded to distress calls and upon arrival discovered an explosion which had subsequently affected adjoining trucks in the compound. 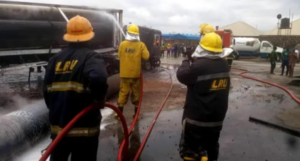 “Further investigation revealed the fire actually started from the battery of one of the truck before escalating to a gas cylinder resulting in a secondary explosion.