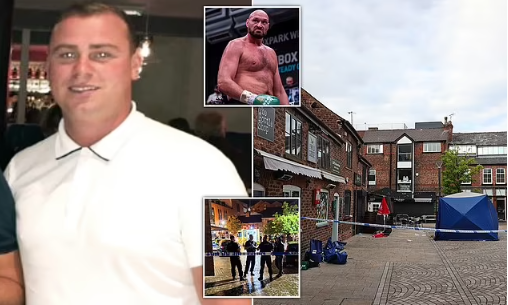 Tyson Fury revealed his cousin Rico Burton has been killed after being stabbed in Goose Green, Altrincham

Tyson Fury’s cousin ‘spent his last hours watching Anthony Joshua’s bout with Oleksandr Usyk before he was stabbed to death in a ‘senseless attack’ during an evening out with friends – as police arrest two men.

Rico Burton, 31, died last night after being ‘stabbed in the neck’ outside a bar in Goose Green, Altrincham, at around 3am on Sunday.

He is understood to have been enjoying an evening out with friends when he was stabbed in a ‘spontaneous’ and ‘unplanned’ attack outside a bar, Greater Manchester Police said today.

A 17-year-old boy was also found with stab wounds, with both victims receiving first aid from members of the public prior to the arrival of emergency services.

They were voth were taken to Manchester Royal Infirmary, where Mr Burton died of his injuries, while the teenage boy remains in a serious but non-life threatening condition.

Two men, 21 and 20, have been arrested in connection with the attack. They both remain in police custody.

Fury today made an emotional plea for tougher sentences for knife crime.

In a post on Instagram this morning, the heavyweight champion called on the Government to deal with the knife ‘pandemic’ and paid tribute to his cousin.

Fury wrote today: ‘My cousin was murdered last night, stabbed in the neck, this is becoming ridiculous idiots carry knives.

‘This needs to stop. ASAP, UK government needs to bring higher sentencing for knife crime, it’s a pandemic and you don’t know how bad it is until it’s one of your own!

‘Life is very precious and it can be taken away very quick enjoy every moment. RIP RICO BURTON.  May the lord god grant you a good place in heaven. See you soon.’

In a police press conference today, Superintendent Ben Ewart said the attack was ‘senseless’, adding that the stabbing took place ‘spontaneously’ and was ‘unplanned’.

Meanwhile, tributes have flooded in for the once-promising boxer, who trained in Manchester throughout his teenage years.

Shaun Egan, who previously coached Rico alongside his brother Steve at Jimmy Egan’s Boxing Academy in Manchester, said: ‘He was an absolute talent. He was such a nice lad, he was hard working and had a great sense of humour.

‘What’s happened is just awful. He was just a great guy. To hear he has died like this is devastating.’

Rapper Prince Markie Dee of the fat boys dies at 52