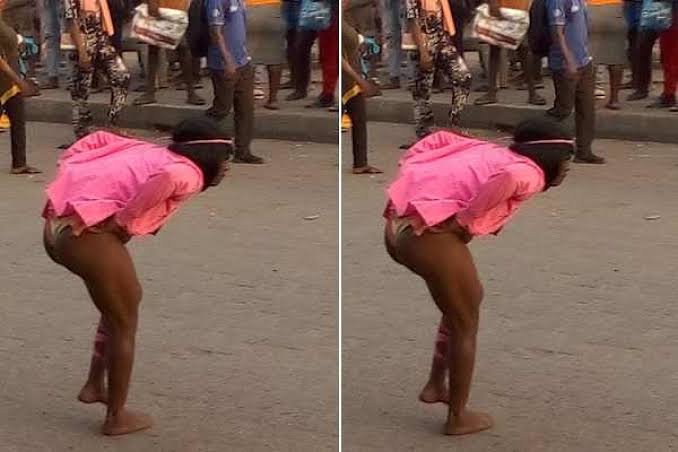 Woman runs mad in Lagos after alighting from black SUV

A middle-aged woman on Wednesday caused a stir at Obalende Bus Stop in Ikoyi -Obalende Local Council Area of Ikoyi, Lagos when she suddenly threw away her bag containing clothes and other items and shouted “my head.”

Eyewitnesses informed newsmen that the woman started behaving strangely a few minutes after she alighted from a black-coloured Toyota SUV and brought out money from her bag to buy a loaf of bread from a hawker.

The incident attracted a huge crowd in the area and caused traffic build-up.

Though the cause of her strange behaviour was not known as of the time of writing this report, witnesses alleged that the owner of the SUV might be a suspected ritualist, popularly called ‘Yahoo Yahoo boys’ and that he might have used her for ritual purposes.

Speaking with newsmen at the scene, a second-hand clothes seller in the area who identified himself simply as Chimela said: “I was shading by my wears when I saw a black coloured Toyota SUV parked opposite me on the road and a middle-aged woman alighted from the SUV.

“I was shocked for a few minutes after the SUV zoomed off, the woman who brought out money from her bag to buy bread from a hawker suddenly threw her bag on a major road and shouted my head and started removing her underwear and started running around everywhere shouting. I believe the owner of the SUV must have used her for ritual purposes.”