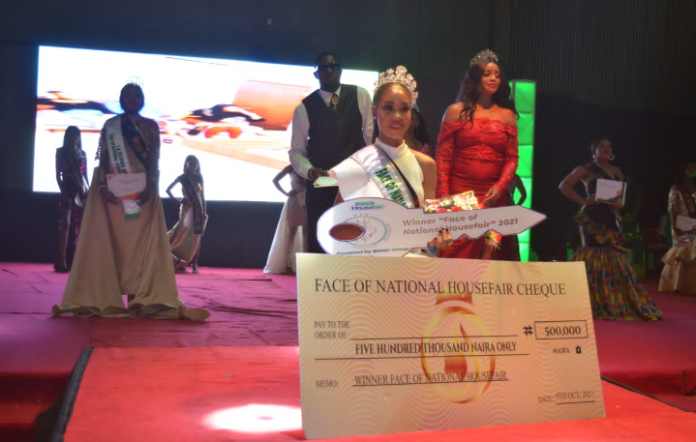 Winners of the 2021 BSTAN House Fair and beauty pageant have expressed dissatisfaction over the inability of the company to offset winning prizes as duly agreed, accusing the organisation of defrauding them as well as exhibiting insincerity and lack of trust.

The pageant was tagged, “Face of National House Fair”.

Several attempts to retrieve the winning prizes from the organisation and its Chief Executive Officer, Dr. Becky Olubukola have been unsuccessful.

Narrating her ordeal to newsmen in Abuja, the winner of the contest pageant, Mary Obadofin said before the commencement of the pageant, all the contestants were meant to market BSTAN’s ticket which was about 60 per cent of their total marks while behaviour and other criteria carry 40 marks.

She said, “I sold the first bundle of ticket and went on with the second one. I sold about N580,000. It’s now time to give us our prizes, since last year we haven’t seen anything.

“October 9 will make it a year, and we have got nothing. The star prize for the winner was suppose to be a car, a plot of land and N500,000. That is what I am to get as the winner.

“We actually went to the company a couple of times, they kept giving us stories upon stories, next time we went again, they were like the company was not involved with the whole pageant” she said.

According to her, the pageant and housing show which took place at International Conference Centre Abuja had her family members who were full of excitement, top dignitaries including star actress Tonto Dike, Ooni of Ife, His Imperial Majesty, Oba Adeyeye Enitan Ogunwusi (Ọjájá II) and many more.

According to Queen Obadofin, despite not offsetting the prizes for winners in the last year’s edition, BSTAN House Fair has gone ahead to plan the 2022 edition in October to scam people again.

She said she has spent more than the prize money she won, calling on Nigerians to assist her retrieve her prize.