In his most recent piece, “Philo,” he mentions a girl named Philomena, to whom he is prepared to express his undying love. This time, the head of the Dangbana Republik imprint, Bella Shmurda, gave us a hint as to what we were missing from him. He’s currently in a romantic mood, and his camps will continue to produce hit songs. Including Omah Lay on the sound was a huge step forward for both stars.

The track serves as a preview of Bella Shmurda’s upcoming debut studio album, “Hypertension,” which will be released in a few months. “Philo,” the song’s music video, has already been shot and will premiere on several music video outlets shortly. Bring it along with you.

Listen and enjoy below: 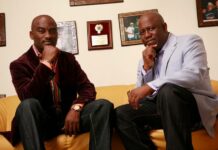 New Video: Nobody Ugly By P-Square