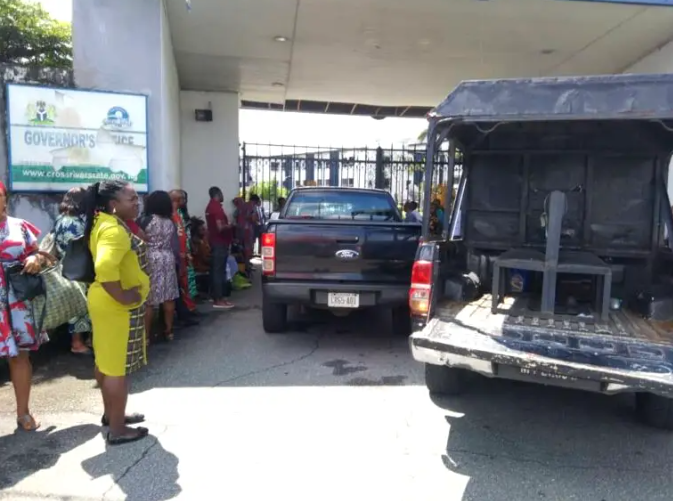 There was a mild drama Wednesday morning when Cross River state governor , Prof Ben Ayade locked out civil servants working in the government house, Calabar for coming late to work.

It was gathered that governor Ayade who came to work before 8: 00 am ordered the Chief Security Officer,CSO, to lock the governor’s office gate and not allow any one coming after 8: a.m to enter the office.

When newsmen visited the governor’s office at about 10:45 am about 100 civil servants were stranded at the gate while some were seen leaving.

A source who pleaded anonymity told newsmen that the governor was surprised to see that many of the civil servants were not on seat when he came in.

“He immediately ordered for the resumption of time book and asked the Chief Security Officer to lock the gate against anyone coming thereafter, the source said.

Findings showed that those locked out included different cadre of workers, including top ranking officer of the state Civil Service as well as political appointees including special Advisers.

When contacted, Special Adviser to Governor on Media & Publicity, Mr. Christian Ita said that the governor had always detested any form of indiscipline and also shown reward to those committed to their duties.

His words: “The normal resumption time is 8am and if a governor can be in office at that time, why can’t others be around.

“The governor has always shown reward and sanction to workers; he doesn’t hesitate to sanction when you err and also reward you when you are committed to duty,” he said.

As at the time of filing this report, several workers who were locked out, were seen hanging around the entrance gate of the state Government House while others moved towards Chieftaincy affairs .

How PDP Is Planning To ‘Retaliate’ With Lagos After Defeat In...