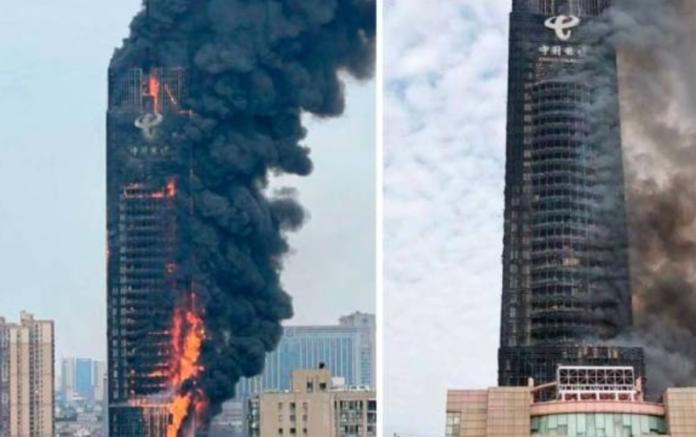 Huge Fire At Chinese Skyscraper In Changsha Burn Many Alive

TSB News reports that a huge fire on Friday, September 16, engulfed a skyscraper reportedly housing China Telecom in the city of Changsha, according to Chinese state media, with hundreds believed to be burnt to death.

According to reports, the total number of fatalities isn’t known yet but videos shared on social media shows dozens of floors burning highlighting the extent of the catastrophe.

Local reports suggest people were evacuated from the building, which is about 200-meters high. China Telecom is a massive, state-owned operation employing hundreds of thousands of staff. It is not known how many work at the Changsha tower and state media says the number of fatalities is not yet clear.

As at press time, the fire has been extinguished but a side of the building looks completely burned out, as thick, black smoke continues to billow into the air.

Changsha is the capital of China’s Hunan province, where about 10 million people live.

💥🚨 Massive Skyscraper Fire in China.
I’m confused, why didnt it collapse perfectly into its footprint at free fall speed?!..👉👉 Why didn’t it fall like the World Trade Center? #bush pic.twitter.com/J8mWsNEftk