The daughter of the widow who was bound for two days and flogged by youths in her community has spoken out for the first time, TSB News reports.

Mrs Amarachi Okechi was accused of witchcraft by her late husband’s brother’s wife.

This led youths in Umueghu, Amaegbuato community, Nkpa Bende LGA, Abia state, to tie her up publicly for two days after which the grown men in the community took turns to flog her five strokes each all over her body

The video sparked outrage and the wife of the Abia State Governor announced that the widow has been rescued and taken to a hospital.

The daughter of the widow took to Facebook to react to her mother’s public humiliation and assaults’.

Flourish Victor explained that she had to leave Lagos for Umuahia when she heard what had been done to her mother.

She said she couldn’t recognize her mother when she saw her after the assault and it broke her heart.

“My heart aches… I feel humiliated… I feel like I’m not alive again. I want revenge… I really want revenge,” she wrote on Facebook. 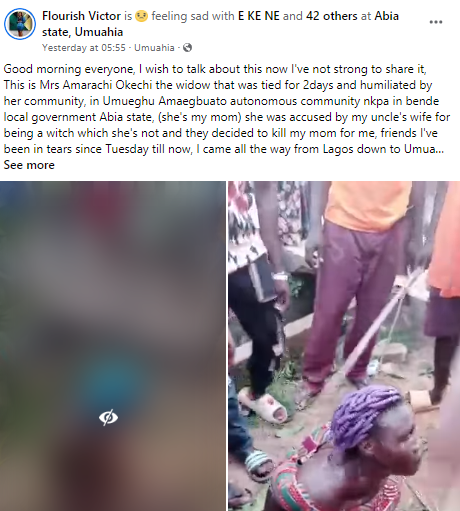 Good morning everyone, I wish to talk about this now I’ve not strong to share it, This is Mrs Amarachi Okechi the widow that was tied for 2days and humiliated by her community, in Umueghu Amaegbuato autonomous community nkpa in bende local government Abia state, (she’s my mom) she was accused by my uncle’s wife for being a witch which she’s not and they decided to kill my mom for me, friends I’ve been in tears since Tuesday till now, I came all the way from Lagos down to Umuahia and I couldn’t recognize my own mom, chai obi agbawalam

,… I feel humiliated, I feel like I’m not alive again, I want revenge