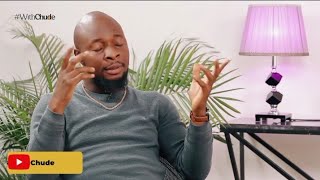 MC Lively, the Nigerian skit maker, has recounted how his friend blackmailed him with pregnancy.

The entertainer, in an interview with Chude Jideonwo, spoke about a 2021 pregnancy controversy involving him.

In 2021, reports surfaced claiming that MC Lively had impregnated his 21-year-old girlfriend and dumped her.

It was alleged that the comedian made her go through with an abortion and broke up with her after the procedure.

Although screenshots of their chat about it were shared on social media, details about the matter remained sketchy.

In his latest interview, Lively said the controversy was a scheme his ex used to siphon money from him at the time.

MC Lively said the lady who he had known for years blackmailed him because he couldn’t help her with her rent.

The comedian said she had lured him to meet with her for sexual intercourse and falsely claimed to be pregnant.

“She always wants a sexual relationship. I didn’t want that. However, I saw something in her. I like music a lot and I’m drawn to people who can sing. So she called me and said she wanted help paying her house rent,” he said.

“I think the money was N800,000. I didn’t have that, so I ignored it. Some time went by, and she called, saying she is on the island and wanted us to hang out. We did. It went down. Three weeks later, she said she was pregnant.”

Lively said the mistake he made when she told him she was pregnant was believing her and not asking for proof.

He said she eventually posted their video on a blog after he refused to give in to her constant financial request.

“It is what it is, so what do you want to do? She said she wants to take it out, that her parents would kill her,” MC Lively further narrated.

“I didn’t know that when someone tells you they are pregnant for you, the first thing is to ask for is the test kit. So one time I figured she was lying because she had been blackmailing and asking me for money.

“Then one time she asked that she needed to go do something and it was a Saturday. I said I’m sorry but I don’t have money. She was so insistent so I sent the money eventually.

“Around 12 pm, I saw a long message saying she couldn’t go to the consultant because they all closed on Saturday. She said she would go on Monday. It didn’t make sense to me so I didn’t reply.

“On Monday, I saw a long text saying, ‘you know I have all the messages, voice notes, and videos. I’m going to post this if you don’t answer.’

“I then replied, ‘wow, so this was your plan all along. I’m disappointed and I’m not scared. if you want to post it anywhere, go and post it.’

“I didn’t think it was blackmail. I thought she throwing tantrums but, there and then, I realised there was no pregnancy from the start. And she was just trying to squeeze out the N800,000 that she wanted for the rent.”