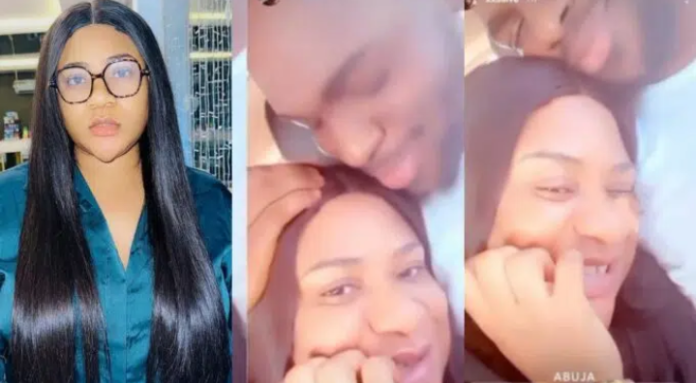 Controversial Nigerian actress, Nkechi Blessing Sunday, has apparently moved on to a new younger lover after her split from Opeyemi Falegan.

The new man in her life took to his social media page over the weekend and posted a loved-up video of them together.

This comes months after Nkechi revealed that she is in a relationship with a man who is 60 years old.

She had made the revelation moments after confirming that her marriage to Opeyemi Falegan had hit the rocks.

During an Instagram live session with crossdresser, James Brown, Chidi Mike and some other participants, she revealed that her 60-year-old lover lives in the United States of America.

According to her, he does not have time to be on Instagram and other social media platforms, so she is the one who informed him of all the scandals she was involved in her past relationships.

Nkechi said: “I’m dating a 60-year-old man now and he gives me so much peace. “He does not have time for Instagram. I’m the one sharing all these scandals to him.”When asked if he’s not too old for her, the actress said; “do you know the 60-year-old man I’m talking about? He lives in America and is younger than all of you on this live video.” In the recent video posted by her man xxssive, on his story, the man kissed her forehead as they just stared into the camera. The location tag showed that they were both in Abuja, the nation’s capital.