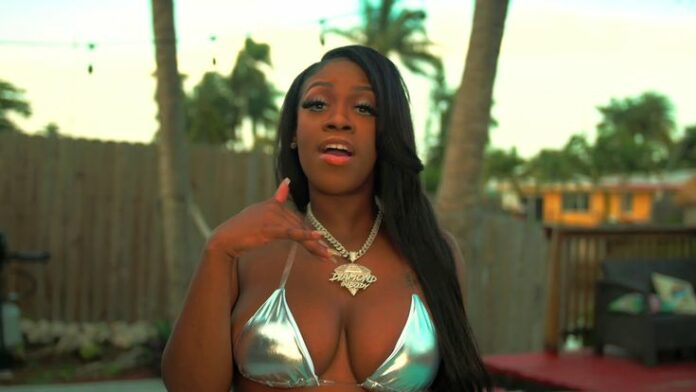 US rapper, Diamond The Body says she has slept with over 2000 men, including Burna Boy (Video)

Rapper, Diamond The Body has left the internet in shock after she revealed the number of people she has slept with.

In a short clip which has gone viral, the Jamaican-American rapper disclosed that she has been intimate with over 2000 people. According to the rapper, the number includes both men and women.

“I am just telling my truth,” Diamond said in the video. The rapper who is 27 years old also added that “I lost my virginity at twelve years old”.

The rapper whose real name is Brittany Nicole Carpenter was speaking in an interview where she was asked what is her body count (the total number of people she has slept with. Revealing that she is into women as well, she said “it’s been a lot” and asked “girl is it just my body count for just nggers or nggers and b*tches?” and her interviewer said both.

She then continued, “I will say like, I will be honest with you, I’ll say like 2000 to be real honest. Like if you putting nggers and btches, I have fcked a lot of btches too, so I been fcking nggers, I been b*tches”.

The revelation has shocked social media users. Reacting to her comment in the video below, an Instagrammer said “God. Devil & Your family members will judge you” with another adding that “If you do the maths. 2000 is WILD considering how many days are in a year. DAMN!!”.

This wouldn’t be the first time Diamond the Body has stirred controversy on social media. In August this year, she shared a nude photo of herself in bed with Burna Boy the African Giant.

Though Burna Boy’s face wasn’t visible in the picture, his tattoos gave him up. In a caption that came with the photo, Diamond wrote, “He says he feel safer over here…..”. However, she deleted the picture soon after it got trending.