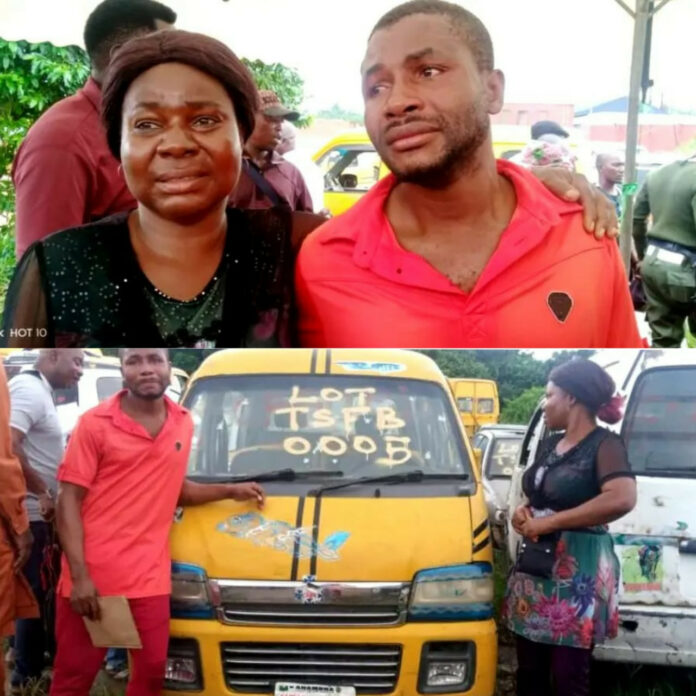 A 49-year-old widow, Dorothy Dike and her son, Osinachi Ndukwe, wept profusely as their only vehicle which they acquired at the rate of N1.8.million on hire purchase, was being auctioned for N450,000, TSB News reports.

Recall that earlier today, the Lagos State Government through its Ministry of Justice and The state Taskforce, organised the public auction of over 134 abandoned and forfeited vehicles, at Lagos State Task Force’ headquarters, Alausa, Ikeja, where a crowd of auctioneers, agents, buyers and vehicle owners tried to outwit one another.

Ms. Dorothy and her son had earlier jumped for joy when their mini bus (Korope), with number plate, ANAMBRA NEN 347 YX, was displayed for auction with an opening bid of N50,000, but the joy was short-lived.

Few minutes later, the atmosphere changed as they wept profusely, rolled on the ground, and begged for price reduction as the bid kept jerking up and hit N430, 000.

The bid was about to close when suddenly the mother and son shouted N450,000 loudly, “help us, help us, please, don’t increase the price again. We cannot afford this but we are hopeful that the vehicle will be ours so that we can work again and raise money to feed ourselves.”

“Help me, help me. I am happy to repurchase the bus but the problem is that we cannot afford N450,000. I am a widow with two children and I hawk herbs on the streets of Lagos for survival. Osinachi is my son and I lost his father three months after delivery and since then, I have been battling to feed my children.

When we heard that the bus will be auctioned today, we borrowed N59,000 to attend the event. Unfortunately, the price for the bus was closed at N450,000,” she lamented.

Osinachi , 31, who couldn’t hide his emotions, narrated how he became a commercial driver due to unemployment.

“I bought the bus at N1.8 million on hired purchase in 2021 and was plying Ijegun enroute Cele Expressway. The bus was three months old and I had remitted N300,000 when I drove against traffic in Cele area and the bus was impounded.

Not only that, I was sentenced to three years imprisonment which I completed recently but before the completion, information reached me that my three years old daughter was ill due to lack of fund and before I completed the jail term, I got information that she had died.

I am here with my mother with the expectation that we will buy the bus at the rate of N50,000. Surprisingly,  the price was closed at N450,000 and we have 48 hours to complete the payment.

We have sold most of our belongings to feed and are left with nothing. This is a great problem before us. My father died while I was three years old and my mother has been there for me but there is no way she can raise N450,000.

Who will I turn to at a time many Nigerians are finding it difficult to feed? I don’t know what to do again”