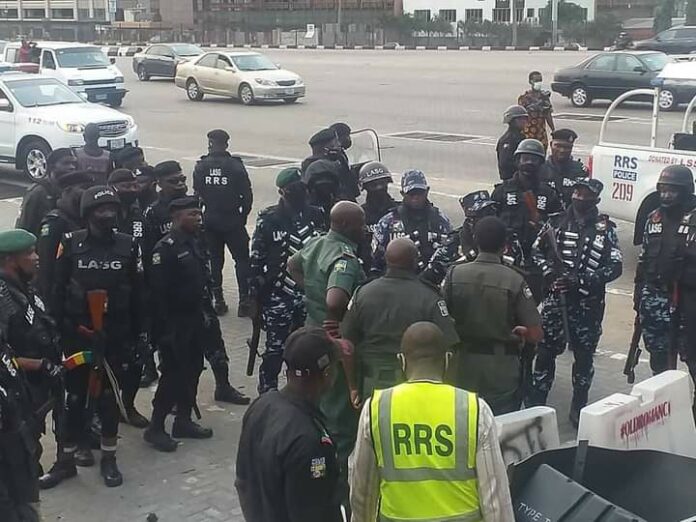 Ahead of today’s rally by the supporters of the Labour Party (LP) in the Lekki area of Lagos State, Lagos State Police Command on Friday took over the Lekki Tollgate on Lekki-Epe Expressway.

The Police had embarked on a show of force exercise around the tollgate with men of the Rapid Response Squad and Lagos State Taskforce.

The deployment of armed policemen is coming after a Federal High Court sitting in Lagos State on Wednesday, ordered the Labour Party and its supporters not to converge at the Lekki Toll-Gate for its planned rally for the party’s presidential candidate, Peter Obi.

Supporters of Obi had scheduled ObiDatti23 Forward Ever Rally to be held on October 1, 2022, in Lagos.

Against the earlier plan to converge at the tollgate, the court ruled that the LP supporters could pass through the facility for its rally but must not converge there.

On Friday, policemen were seen heavily armed, and have practically taken over the Lekki community in a bid to forestall any planned rally in the area.

During the show of force, Armoured Personnel Carriers (APCs), patrol vans and black maria were stationed at the tollgate vicinity.

Spokesperson of the Command, SP Benjamin Hundeyin in one of his tweets said, “In continuation of its routine convoy patrol of the metropolis as directed by the Lagos Commissioner of Police, CP Abiodun Alabi, Commander RRS, CSP Olayinka Egbeyemi is presently leading RRS team and Lagos Taskforce on convoy patrol of the city.

In a statement, Hundeyin said no form of rally whatsoever will be allowed at the Lekki Toll gate on Saturday, October 1, 2022.

He said, “this emphasis has become necessary to enlighten Nigerians that might be misled into converging on the toll gate. A court of competent jurisdiction has ruled that no person is allowed to converge on the Lekki Toll gate for whatever reason.

“In conformity with its mandate to protect life and property, the Lagos State Police Command under the leadership of CP Abiodun Alabi, fdc will leave no stone unturned in ensuring total compliance with the court order and an emplacement of adequate security in the state.

“While the Command is not averse to the peoples’ right to freedom of assembly and association; and expression, the Command will equally live up to its mandate of ensuring that no person or group of persons is allowed to infringe on the fundamental human rights of others, especially the rights to freedom of movement and right to dignity of human persons, especially under the guise of rally or procession.

“The warning, therefore, goes that anyone found flouting the court order or infringing on the rights of other Nigerians will be dealt with in accordance with the law.”

They jailed me for six years for a crime I did...